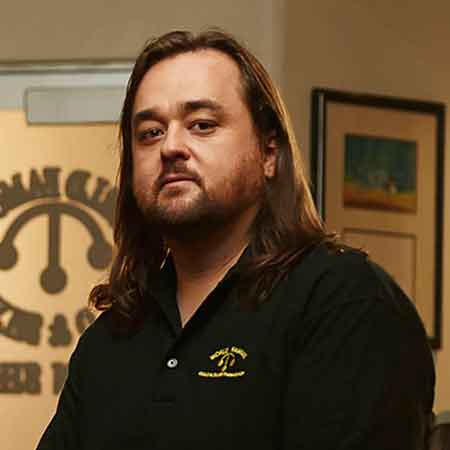 Austin Lee Russell better known as Chumlee is an American actor, businessman and reality television personality. He is best known for his appearances in the History Channel television show Pawn Stars. The show chronicles the daily activities at the World Famous Gold & Silver Pawn Shop which is filmed in Las Vegas, Nevada. He is happily engaged to his fiancee, Olivia in August 2018.

Chumlee was born as Austin Lee Russell on September 8, 1982, in Henderson, Nevada, US. He was 12 when he has given the nickname, Chumlee because of his large face and chin. He has  Scottish descent. Mexican, Native American descent.

As a child, he became good friends with  Corey "Big Hoss" Harrison whose father and grandfather opened the Gold & Silver Pawn Shop in 1989 which always inspires him to do something big in this field.

Chumlee started working for the Gold & Silver Pawn shop at the age of 21. He rose to fame after starring in the reality TV series, Pawn Stars aired on History Channel in 2009 starring Rick Harrison, Richard Harrison, Corey Harrison. He served behind the counter of a shop such as testing items, loading items, and writing tickets for items purchased by customers.

Chumlee referred to as the "village idiot" in the series because of his foolishness which he responded that he is underestimated. But from the second season, he started getting love and appreciation for his work and soon became the breakout character of Pawn Stars.

Did you know Chumlee and Olivia Rademann parted their ways? No? click down the video given below and know more about it:

Later, Chumlee formed his own company, which sells novelty items like, T-shirts of his own design, and arranges for his personal appearances. He appeared in the episode "iLost My Head in Vegas", on the American TV series iCarly along with Rick Harrison and Corey Harrison. In 2017, he opened a candy shop, Chumlee's Candy on the Boulevard in Las Vegas.

Chumlee is one of the highest-paid TV stars in Pawn star. He has an estimated net worth of $5 million. In 2010, Chumlee sold half of his company's stake to Rick Harrison for $155,000 so his shop handles more orders.

Chumlee is happily engaged to his girlfriend-turned-fiancee, Olivia who is a fitness freak.  The couple dated for a long time and finally engaged in August 2018 at an intimate ceremony. Previously, he was in a romantic relationship with Tanya Hyjazi who is a chef for a major Las Vegas casino. The duo is together for a short time before their official split.

Chumlee is quite popular on Instagram with 168k+ followers. He is an avid dog lover and pet two dogs whose pictures he often shares on Instagram. He is a huge fan of TV series like Sons of Anarchy,  Boardwalk Empire, and Breaking Bad.

Great time at the fashion for autism gala. With my rock @kiiimchiii_

Chumlee's father died at the age of 54 due to pancreatic cancer just before two weeks of debuting at Pawn Stars. His father sudden death inspired him to altered his lifestyle habits and lost 75 lb (34 kg) in a year by a good diet and perfect exercise. His diet enabled him to be able to ride a hovercraft which he couldn't ride previously because of his heavyweight.

In 2016, Chumlee's house was raided during the course of an investigation into sexual a s sault allegations. During an investigation, police found marijuana, crystal meth and one firearm. On a further search, police found 11 more legally owned firearms including MP5 and .223-caliber rifles.

Most of his guns were found a bedroom vault safe, along with 17 multi-dose ‘bars’ of the anti-anxiety drug and seven capsules containing small amounts of methamphetamine along with evidence of possible cocaine use on the property.

Later, Chumlee was arrested but he was released on bail the following day. In March 2016, he first appeared in the court, later in May he was charged with 20 felony counts, including drug and weapons charges. David Chesnoff who is the lawyer of Russell's stated, the reality star was pleaded guilty to a felony weapons charge, unlawful possession of guns which calls for three years probation and counseling.

Below we present the video of Chumlee;