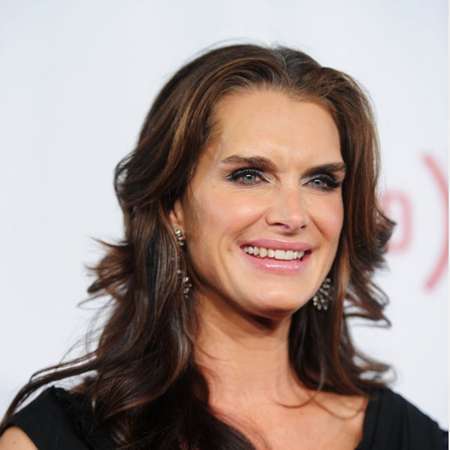 Brooke Christa Shields, an American actress, and model started gaining fame when she played the role of a child prostitute in the controversial film Pretty Baby, just at the age of twelve. By the age of fourteen, she was already starring in several dramas, such as The Blue Lagoon and Endless Love. Born on May 31, 1965, Brooks is a native of Manhattan, New York.

Brooke Shields was born to Teri Shields, who was of German, English, Scots-Irish, and Welsh descent, and Frank Shields, who was of Italian, Irish and English descent. She also has ancestral links with several noble families from Italy. Her family raised her in the Roman Catholic faith. Growing up, Shields learned piano, ballet, and riding lessons. Her mother was dedicated to making her successful in the show business.

Until eighth grade, Shields attended the New Lincoln School. She then joined The Dwight-Englewood School in Englewood, New Jersey and graduated from there in 1983. She got enrolled at Princeton University and graduated in 1987 with a bachelor’s degree in French literature. Shortly after her graduation, Shields was criticized for not having taken any courses in history, mathematics, philosophy, economics, world literature or science with laboratory experience.

Brooke Shields’ career began at as early as 11 months old. She was already a model in 1996, and her first job was for Ivory Soap, shot by Francesco Scavullo. She had a successful child model career with Eileen Ford, a model agent. In 1978, at the age of twelve, Shields played a child prostitute in the controversial film ‘Pretty Baby’. In 1980, she became the youngest fashion model ever to appear on the cover of Vogue, at the age of 14. In the same year, she also appeared in print and TV ads for Calvin Klein’s jeans, which was very controversial but managed to catapult Klein’s career to super-designer status.

By the age of 16, Shields managed to become one of the most recognizable faces in the US, thanks to her career as a provocative fashion model and controversial child actress. She appeared on the cover of several vogue magazines.

Apart from the controversial film, Pretty Baby, Brooke Shields has played in several other movies as well. Although she generally received negative remarks and comments, she did not give up her acting career. Some of the movies she has played in are The Blue Lagoon, Endless Love, Speed Zone, Hannah Montana: The Movie, The Hot Flashes, etc.

Shields has also appeared in a number of television shows, including The Muppet Show, Friends, Suddenly Susan, Hannah Montana, The Middle, Who Do You Think You Are? etc. Her most significant role in television is in Suddenly Susan, where she played the role of Susan Keane, the protagonist. She was cast in the show for four years, from 1996 to 2000.

From 2017-18, Shields played the role in the TV series Law & Order: Special Victims Unit sharing the screen along with Diane Neal and Mariska Hargitay.

Brooke Shields's Net Worth And Earnings

Brooke Shields has also released a book titled ‘Down Came the Rain’, which is about her postpartum depression. She has suffered from depression, thoughts of suicide, an inability to respond to her baby's needs and delayed maternal bonding. She currently has a net worth of $25 million as per celebrity net worth, in 2019.

In 1997, Brooke Shields first married professional tennis player Andre Agassi. The two were dating since 1993. The couple divorced two years later, in 1999. The reason behind their separation was never revealed.

In 2001, Shields got married again television writer Chris Henchy. The couple met for the first time through mutual friends a couple of years ago they walking down into aisle. The couple has two daughters. The power couple currently resides in Manhattan, NYC with their kids.

The actress's first boyfriend was King of Pop Michale Jackson. The two started dating when she was 13 and Jackson was 21. And song after that, they became good friends.