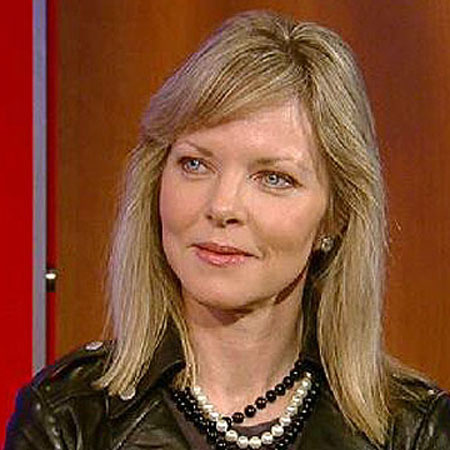 Melissa Sue Anderson is an American-Canadian actress, known for her portrayal of Mary Ingalls in an American western drama television series, Little House on the Prairie along with Adrienne Maloof, Alison Arngrim and Karen Grassle.

Anderson became a naturalized citizen of Canada in 2007. In 2010, she published The Way I See It: A Look Back at My Life on Little House, an autobiographical account of her years acting on Little House on the Prairie.

In 1990, Anderson married Micael Sloan, a writer, producer, as well as a director. The pair has two children: daughter Piper and son Griffin.

Melissa Sue Anderson was born on 26th September 1962 in Berkeley, California, U.S. She belongs to White-American ethnicity and holds an American nationality.

Anderson was the youngest of two daughters and her older sister, Maureen is 12 years senior to her. At the age of 7, her family moved to Southern California. Her parents divorced when Anderson was thirteen years old.

Due to her asthma, she was encouraged to get involved in activities including dance class where her dance teacher encouraged her to take acting lessons. Later, she started working as a child actor.

Melissa Sue Anderson began her acting career in the early 70s as a child actress. With her golden hair & blue eyes, she was a hit with casting directors.

Anderson was a guest actress in the family television series, The Brady Bunch: Never Too Young (1973) and theatrical film, Shaft (1973).

In 1974, when she was 11, she had her big break when Anderson appeared as Mary Ingalls in an American western drama television series, Little House on the Prairie.

At the end of the fourth season of the show, Little House on the Prairie, her character went blind; after this storyline aired Anderson got nominated for Emmy awards in the lead actress category.

During the period in Little House on the Prairie, she pursued other opportunities and was cast as a guest-starred on The Love Boat. She also performed in which Mother Is Mine?, and won the Emmy Award in 1979.

After ending her role in Little House on the Prairie, she starred in the 1981 Canadian slasher film, Happy Birthday to Me as Virginia Wainwright. She also guest-starred on shows like The Equalizer and Murder, she wrote.

Most recently, Melissa Sue Anderson appeared in the 2018 heist comedy film, The Con Is On, starring Uma Thurman, Alice Eve and Maggie Q.

American-Canadian actress, Melissa Sue Anderson's total net worth is estimated around $1.5 million. She has appeared in some movies and television series and earned a decent amount of salary.

Her works included the television shows, "The Love Boat", "Murder, She Wrote", "The Equalizer", and "Partners".

Anderson’s movie, Happy Birthday to Me made a box office collection around $10.6 million. Her autobiography, The Way I See It - A Look Back at My Life on Little House was sold for $12.79 per copy.

Happily Married to Michael Sloan Since 1990

Melissa Sue Anderson married a writer, producer & director, Michael Sloan in 1990. The couple is blessed with two children, a daughter Piper born in 1991 and son Griddin; born in 1996. She decided to focus on motherhood instead of acting.

In 2002, Anderson along with her family moved to Canada, and her husband became Canadian Citizens in 2007.

Anderson wrote an autobiography entitled The Way I See It - A Look Back at My Life on Little House.  On the Today show in 2014, she also participated in the Little House cast reunion.