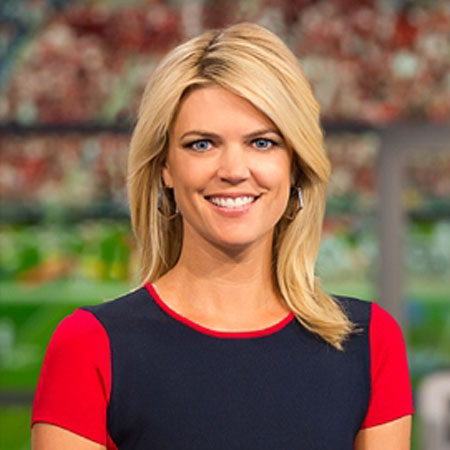 Melissa Stark is a popular Television anchor and sportscaster currently associated with the NFL network. Earlier, Stark has been working with the NBC network since 2003. She was the correspondent of the Today's show at NBC. Stark is mostly known for covering the 2008 Beijing Olympics for the MSNBC.

She was also a correspondent for NBC's The Today Show. She anchored MSNBC's coverage of the 2008 Beijing Olympics in the summer of 2008.

She has been married to her boyfriend, Mike in 2001 after dating for about 2 years. They first met through their mutual friend in July 1999 and were engaged after 11 months. The couple has four children; two sons named Jackson Lilley and Michael Lilley Jr. and twin daughters.

Melissa Stark was born on November 11, 1973, in Baltimore, Maryland in the United States of America. She is an American by nationality. Stark is the daughter of Walter Stark, a reputed eye surgeon by profession. Her zodiac sign is Scorpio.

Melissa Stark began her career as a news intern working on the assignment desk in 1991 at WMAR-TV, Baltimore. In 1993, she became the correspondent for CBS Evening News with Dan Rather. Similarly in 1994, Stark worked for health correspondent Dr. Bob Arnot.

Stark worked at Virginia Sports Marketing in Charlottesville for the  University of Virginia's Coach's TV Show as production assistant and reporter from 1994-1995.

Melissa Stark joined the ESPN sports center team in 1996 and she worked there till 2003. She reported and presented various sports events and programs while she was at the ESPN sports center. Then she joined ABC sports in 2000. She worked at ABC Sports as the lead sideline reporter for Monday Night Football.

At present, Melissa Stark is associated with the NFL network. She hosts several popular sports programs at NFL network which includes GameDay First and First on the Field. She has also worked with other famous journalists like Alex Flanagan, Lindsay Rhodes, and Bonnie Bernstein.

Melissa Stark already has a lot of experience working for big sports news networks. She is one of the most admired sports journalists in the United States so it is certain that she is paid well by her employees. NFL network pays well to its employees including its star anchors and reporters.

Her net worth is assumed to be about a million, the however actual amount is unavailable. An average salary of sports caster is around $18,824 and $75,754 per year so her salary also might be in the same range.

Standing at five feet and four inches, Melissa Stark is of average height. At the age of 43 years, Stark still looks fabulous with stunning body measurements of 34-26-35 inches. She has blonde colored hair and hazel eyes.

The 46 years old, Melissa Stark is married to Mike Lilley. Stark married her boyfriend, Mike in 2001 after dating for about 2 years. They were first introduced to each other by their mutual friend in July 1999 and were engaged after 11 months.

Melissa's boyfriend first asked her to marry him on June 19, 2000. She was also offered the job of MNF sideline reporter at the same time. Stark's husband works as a bond trader for Morgan Stanley Dean Witter in Manhattan.

The couple has four children. They have two sons named Jackson Lilley and Michael Lilley Jr. and a pair of twin daughters. She is living a happy life along with her husband Mike and their children in their home at Sea Bright, New Jersey.