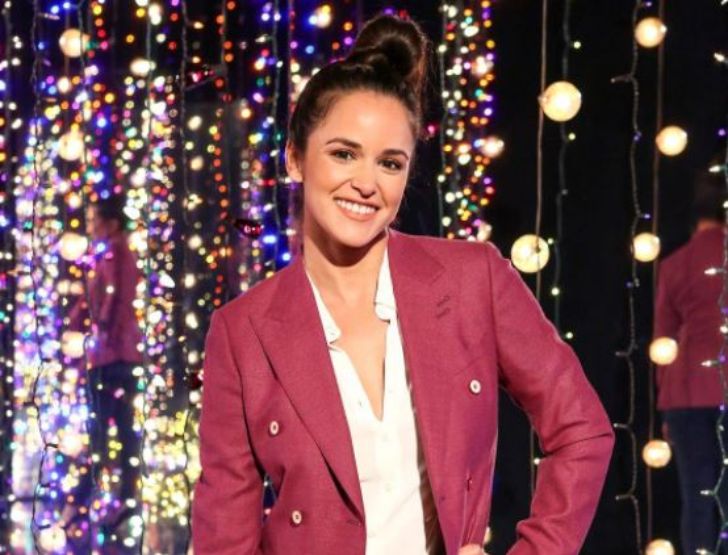 American actress and director Melissa Fumero turned professional shortly after her graduation from New York University in 2003. With her debut role as Adriana Cramer in the ABC drama series One Life to Live (2004-11), Fumero made her breakthrough and has since held a firm grip in the acting industry. Furthermore, she portrayed the main cast Amy Santiago in Brooklyn Nine-Nine (2013- Present).

Fumero was born as Melissa Gallo on August 19, 1982, in North Bergen, New Jersey, the United States of America, as one of the four children born to Carlos Fumero, an archeologist, and his wife Martha Fumero who was an explorer but later turned to be a travel guide. An American by nationality, she belongs to white ethnicity.

Her parents, who were Cuban, were in love since a young age had traveled to the United States of America as teenagers and for a certain time period didn't see each other at all. They later met again after some years and got married, eventually settled in the United States.

She has two elder sisters; Julia and Johanna, as well as a younger brother named Maximillian (or Max).  After the death of her father when she was a young teenager, the family was looked after by her mother and her eldest sister had been working to support the family.

Until the age of 6, Fumero lived in Guttenberg, New Jersey, before her family moved to Lyndhurst, New Jersey.  Interested in music since her childhood, Melissa, who began to learn guitar at 4, often participated and played in her school programs. Moreover, she was very active in her extra circulars and also played lacrosse till she was in her mid-school.

Apart from singing, she also liked dancing very much and took dance lessons with her mother, who happened to be a ballerina. She also was involved in drama and used to perform in the local church on Sundays.

After high school, her immense love for arts drew her pa s sion into acting. So, Melissa Fumero moved to New York and enrolled at New York University; she graduated with a Bachelor of Fine Arts in Drama in 2003.

Acting Breakthrough From 'One Life to Live' and 'Brooklyn Nine-Nine'

Melissa Fumero made her acting debut in 2004 through the soap opera One Life to Live, where she portrayed Adriana Cramer until 2011 (207 episodes).  In fact, she was the second actress to play the role, firstly, Amanda Cortinas portrayed Adriana in 2003. The TV soap opera starred Erika Slezak, Michael Easton, Kristen Alderson, and Ka s sie Wesley DePaiva.

Throughout the 2000s, the American actress guest-starred in many TV series such as All My Children, Haute & Bothered, The Mentalist, and Gossip Girl.

After brief appearances in Royal Pains and CSI: NY, Fumero landed as the main cast Amy Santiago in the police procedural sitcom Brooklyn Nine-Nine (2013- Present). So far as of 2021, she has worked in 153 episodes of the series starring Andy Samberg, Stephanie Beatriz, Terry Crews, and Joe Lo Truglio.

Following movie works in The Play Date (2019, TV film) and A Stone in the Water (2019), Melissa briefly worked in TV series such as One Day at a Time, Big City Greens, Room 104, and Elena of Avalor.

Net Worth Of Melissa Fumero

Pouring the hard work of more than 15 years into the acting industry, Fumero's growing acting prominence and fame has crowned her the tag of a millionaire. Ever since she landed as Adriana in the soap opera One Life To Live, Melissa saw many on-screen opportunities and notably played Amy Santiago in Brooklyn Nine-Nine.

According to Celebrity Net Worth, Melissa Fumero has an estimated net worth of $4 million as of 2021. The chunk of her fortune came through lucrative earnings from her acting career but didn't specify the exact payroll. Allegedly, she makes a salary in the 6-digit figure per year (tens of thousand dollars an episode) from a TV venture.

She has a luxurious house in Los Angeles and owns a white Ford car.

In the TV series Brooklyn Nine-Nine, Melissa had an on-screen match-up with Andy Samberg that rose up dating rumors. However, both of them enjoy their respective married life- Samberg is married to singer-songwriter Joanna Newsom.

Currently, Melissa Fumero is in a marital relationship with her boyfriend-turned-husband as well as her co-star David Fumero. They shared the screen of Brooklyn Nine-Nine, where David portrayed her cousin.

Reportedly, they began dating shortly after they met on the set of One Life To Live. The couple got engaged in December 2006 and married on December 9, 2007; after marriage, Messlia changed her surname 'Gallo' to 'Fumero'.

The Brooklyn Nine-Nine star posted a black and white photo of the newborn on Instagram to announce the birth of her second.

As for a fact, Melissa announced both of her pregnancies on the same day, on November 16.