Melissa Fumero and Husband David Fumero Welcomed Another Son Together

Family of Four! Double trouble! Melissa Fumero (aka Melissa Gallo) and her husband, David Fumero, have welcomed their second child, another son.

The Brooklyn Nine-Nine star gave birth to the baby boy on Friday, February 14, and she took to Instagram on Saturday, February 15, to announce the arrival of the latest addition.

The baby was born on the special occasion of Valentine's Day and the couple has named him Axel Fumero. Alongside a black and white photo of the newborn, she wrote,

Welcome to the world, Axel You have made Valentine’s Day my new favorite holiday! 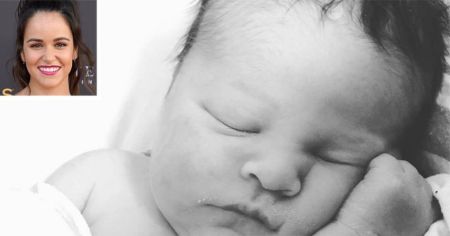 The television personality, 37, announced that she and her husband were expecting their second child, by debuting her baby bump in an Instagram post on November 17. She wrote at the time, "Oh yeah, I’m hella pregnant."

The former Mentalist star and the One Life to Live actor, 46, welcomed their first son, Enzo Fumero, in March 2016.

Melissa and David, who got engaged in December 2006 after dating for years, tied the knot in a beautiful ceremony in New Jersey on December 9, 2007. They exchanged vows in front of close friends, family and their Llanview castmates.