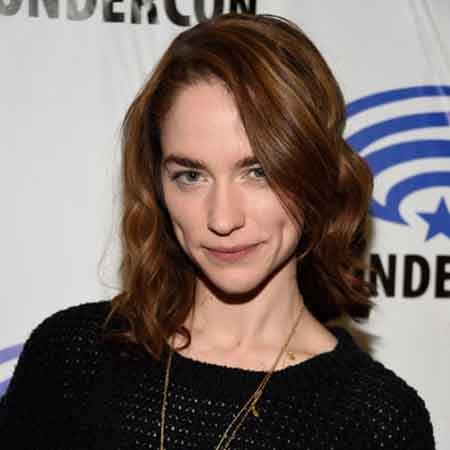 Known for playing the role of Rebecca on CBC's series, Being Erica, Melanie Scrofano is a famous American actress. Scrofano is also popular for portraying the role of October in the mockumentary series Pure Pwnage and Tia Tremblay in CTV's fantasy drama The Listeners. She, however, gained international fame following her role as Wynonna Earp in the television series Wynonna Earp.

Melanie Scrofano was born on December 20, 1981, in Ottawa, Canada under the birth sign Sagittarius. Her father is an engineer whereas her mother is a government worker.

Initially, she used to work in an ice cream shop. From the early age of 13, Scrofan began her career in modeling and later pursued a career in acting after her agent submitted her some acting jobs. She appeared on several covers of magazines all over the world.

Melanie Scrofano debuted on the silver screen in 2008 as Mani White in a horror film, Baby Blues. The movie starred Colleen Porch and Ridge Canipe. The following year, she worked in two movies, A Good Meal and Saw VI.

Scrofano portrayed the role of Ann Roberts in the drama film, Edwin Boyd: Citizen Gangster with Scott Speedman, Kelly Reilly, and Kevin Durand. Some of her other movies include Murse 3D, Wolves, and Robocop among others.

The Being Erica star made her acting debut in 2002 as Isobel in MTV's anthology series, Undressed. She then played an uncredited role in several TV series like Mob Stories, Naked Josh, Beautiful People, and Jeff Ltd.

In 2010, she earned her first lead role, October in the mockumentary series, Pure Pwnage starring Jarett Cale and Joel Gardiner. The same year, she played a recurring role for 10 episodes in CBC's comedy-drama TV series as a former actress, Rebecca.

One of her popular works includes the 2012's TV series, The Listener where she shared the screen with Craig Olejnik, Ennis Esmer, and Lauren Lee Smith. In 2016, she played the title role on Syfy's modern Western drama, Wynonna Earp starring Shamier Anderson, Tim Rozon, and Dominique Provost Chalkley. In 2018, she worked in CBC's TV drama, Frankie Drake Mysteries.

The 39-year-old actor gained most fame after the title character on the Syfy modern Western drama Wynonna Earp. The series has four seasons which ended in 2021.

Melanie Scrofano has an estimated net worth of $1 million as per some online sources, however, the amount is still under review. Scrofano earns an impressive amount from her acting career.

She worked in several movies that made a good collection at the box office. Here is the list of her hit movies:

Besides, she is also involved in several charitable works. She supports Crowdrise by ''gofundme'' which helps to raise funds for charity.

Scrofano is a married woman; tied the knot to a non-celebrity, Jeff. The couple exchanged vows in a private ceremony with their close ones in attendance. As per some online sources, the couple dated for months before getting married.

They rarely appear in public and rarely posts pictures on social media, a sign that proves they like to keep off the limelight. The husband and wife couple is together for years without any divorce rumor.

The couple shares two children together. Scrofano announced her second pregnancy while shooting for the second season of the TV series, Wynonna Earp. She worked in the series even during her pregnancy. On 18th April 2017, she gave birth to her second son.

Here is an interview with Scrofano where she talks about her pregnancy.