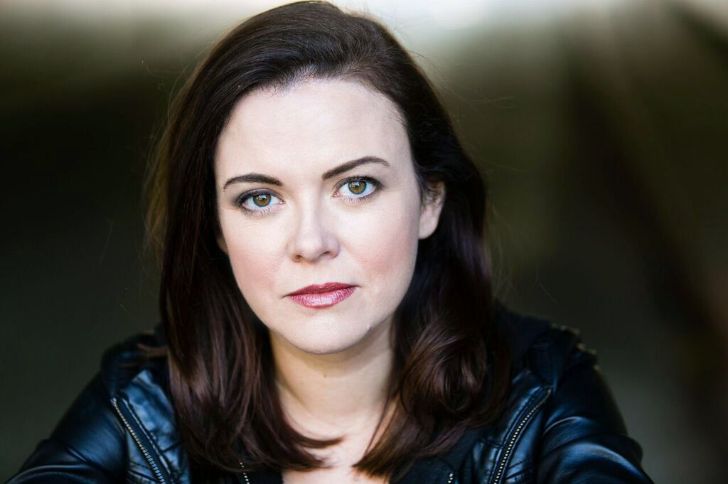 Mary Kate Schellhardt, an American actress saw the introduction to TV career after casting director Gail Levin discovered her & cast her as Ellen Grape in What's Eating Gilbert Grape (1993). Ever since Schellhardt turned professional, she records 19 acting credits that include her work in films: Apollo 13 (1995), Free Willy 2: The Adventure Home (1995), and Jack Rio (2008).

The Carnegie Mellon University's School Of Drama graduate also landed in guest roles in TV series: The Untouchables, Scrubs, Private Practice, and New Girl. Since 2016, she is not active on a TV career & is set to make her comeback through a pilot episode of Habata (release date not disclosed).

How Old Is Mary Kate Schellhardt? Her Height?

Schellhardt was born on November 1, 1978, in Chicago, Illinois, the USA in an artistic family. As of November 2020, she is 42 years old. Mary has 2 sisters (Laura and Eliza) and a brother named Stephen Schellhard, an actor, though no further detail on her parents is out. Sources report that

Passionate about acting since her childhood, Kate Schellhardt worked in plays during her days in New Trier High School in Winnetka, Illinois. Moreover, she also studied acting at the Piven Theatre Workshop and honed Viola Spolin techniques.

After graduation, the American actress enrolled at Carnegie Mellon University's School Of Drama and earned a
Bachelor of Fine Arts (BFA) degree. Later, she moved to Los Angeles to try out her hands in big-screen & TV works.

Acting Debut At The Age of 13

The Chicago native made her film debut at the age of 13 as Ellen Grape in the 1993 drama film What's Eating Gilbert Grape starring Johnny Depp, Juliette Lewis, Mary Steenburgen, and Leonardo DiCaprio. It was all thanks to Mary's theater appearances as casting director Gail Levin discovered her & landed her in the role.

Following a guest-appearance in The Untouchables (1994), Schellhardt portrayed Barbara Lovell in the 1995 commercial-hit space docudrama film Apollo 13. There, she shared the screen with Hollywood figures such as Tom Hanks, Kevin Bacon, Bill Paxton, and Ed Harris.

The movie made on the budget of $52 million recorded a box-office collection of $355.2 million.

Moreover, in 1995, she starred as Nadine in the film Free Willy 2: The Adventure Home and as Terry Venessi in The Great Mom Swap (1995, TV movie).

The American actress then worked in Out of Courage 2: Out for Vengeance (1999, short-film) and Chicken Soup for the Soul (2000, TV series).

To hone her screen and on stagecraft, Mary studied at Carnegie Mellon University until her graduation in the mid-2000s.

However, by the beginning of the 2010s, Mary Kate Schellhardt's on-screen appearance began to dwindle. Having worked in Infection: The Invasion Begins (2011) and in an episode of Ben and Kate (2012), her most recent TV appearance was in 2016; New Girl (TV series) and Saturday Scout Club (film).

As per IMDB, she is set to appear in a pilot episode of Habata as Lucinda. Though, no further update on her upcoming TV or film works is out. On top of that. Mary is not active on social media platforms such as Instagram or Twitter where celebrities often promote their upcoming projects.

Despite the fact that Schellhardt is not active on-screen since 2016, her career on the big screen during the 90s: What's Eating Gilbert Grape, Apollo 13, and Free Willy 2 got her a considerable sum. Online sources estimate that Mary Kat Schellhardt has $200,000 net worth in late 2020.

Even if no official report on her payroll came up or the actress ever opened up about her earnings, she allegedly pulled in hundreds of thousand dollars annually during her career height.

The American actress currently in her early 40s has always remained low-key about her relationship status. Over these years, no report on Mary's dating life or boyfriend came up. Moreover, she is not officially married or has any traces of popular past relationships or ex-husband.

At the moment, Schellhardt is allegedly single & resides in her hometown Chicago, Illinois.