Martyn Ford is a famous English bodybuilder, former cricket player, and actor who is currently in the headlines for appearing in the television series, The Nevers. The actor has also appeared in movies like Accident Man, Redcon-1, Kingsman: The Golden Circle, and many others.

Martyn was born on 26th May 1982, in Minworth, Birmingham, West Midlands. As of 2022, his age is 40. His birth sign is Gemini. His nationality is English, and his ethnicity is Caucasian white. He was born to his mother, Lorraine, and his father, Stephen. He might have studied and spent his childhood in the United Kingdom. However, further details on Ford's early life and educational qualifications are missing.

The bodybuilder is 6 feet 7 inches tall and spends major time in Jim. He often posts his workout videos on his Instagram account. Further, the media personality is fond of tattoos. He has inked tattoos on his neck, arms and chest.

Is Martyn Ford Married? Who Is His Wife?

A professional bodybuilder is a married man. He is married to his wife, Sacha Stacey. The couple, after dating for a while, exchanged the wedding vows in 2009. As of now, the lovely duo enjoys over a decade-long conjugal life without any divorce or separation issues. 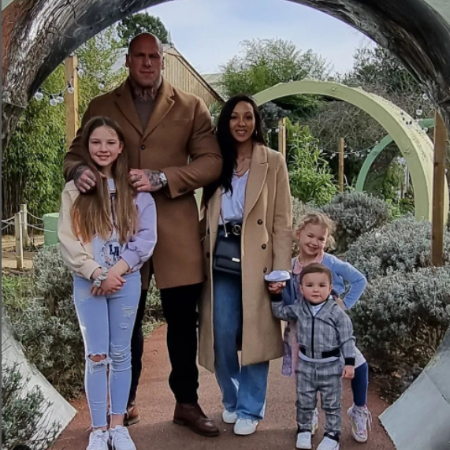 Three years after tying the knot, the pair welcomed their first child, daughter Imogen. Their second daughter was born in 2017. Later, the pair was blessed with a baby boy. Ford is a family man and is often captured spending quality time with his family, wife, and kids.

Started as a Cricket Player

From a very young age, Martyn was interested in fitness training; thus, started exercising at the age of eleven. He was interested in sports. During his teen days, he joined the Warwickshire cricket team as a bowler.

Martyn wanted to become an international cricketer to represent the English national team, but his dreams were shattered. He suffered a severe injury at the age of nineteen and was compelled to leave cricket. He then fell into a deep depression.

Ford started his acting career in 2016, appearing in Boyka: undisputed. Since then, he has worked in movies like Kingsman: The Golden Circle, Redcon-1, Accident Man, Robin Hood The Rebellion, Kill Ben Lyk, Final Score, and so on.

The actor has appeared in the television series, The Nevers alongside stars like Laura Donnelly, Viola Prettejohn, Pip Torrens, Denis O’Hare, and Elizabeth Berrington. The same year, he is set to appear in Fast and Furious 9 as Lt. Sue.

How Much Is Martyn Ford’s Net Worth?

The father of three is a famous English bodybuilder, fitness trainer, social media influencer, and actor who has been earning a high figure of money.

As of 2022, Martyn Ford’s net worth is reported to be around $1 million. As an actor, his salary might be approximately $50 thousand. The average salary of a bodybuilder ranges from $19,726 to $187,200. Besides, he might earn good money from his social media account. He has 3.9 million followers on Instagram as of May 2022.