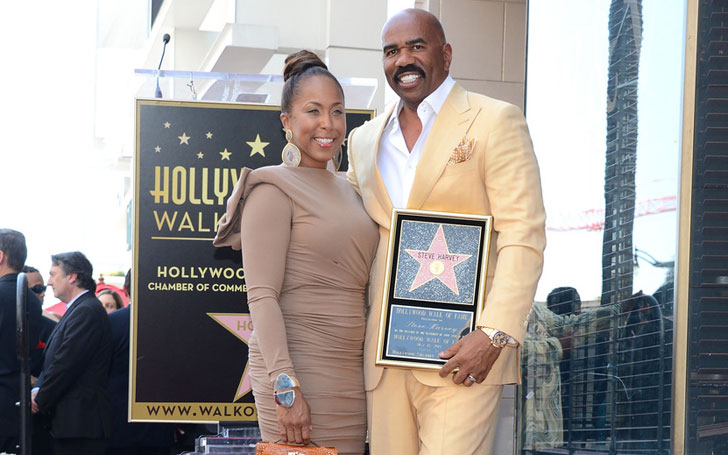 Marjorie is younger than comedian but never afraid to speak her mind and support her husband in the face of all adversity. Eager to know more about the couple. We have some exclusive details on their married life, keep on read.

Marjorie Bridges is married to Steve Harvey. Steve is a TV/radio personality, producer, and comedian while Marjorie is a fashion connoisseur and strolls by fashion shows around the world. Marjorie's husband Steve was married to Marcia from 1980 to 1994, and Mary Shackelford from 1996 to 2005. In 1997, the Family Feud host, Steve purchased the “Adore You” yacht for his mistress Marjorie Bridges Townsend Woods.  The same year the talk show host's second wife Mary gave birth to their son Wynton Harvey.

Steve Harvey and Marjorie Bridges with their seven children

Marjorie and Steve met for the first time at a Memphis comedy club in 1990 and Steve lament it is the love at first sight. Steve even announced on stage that night. The couple started dating publically after some time.

Marjorie Bridges, 55, married Steve Harvey on 25th June 2007. The Family Feud host, Steve Harvey, says Marjorie has made him a better man. It's been nearly 13-year that the couple is still sharing a loving relationship with no rumors of divorce.

Marjorie was reportedly married twice before Steve. That means both Steve and Marjorie have married thrice. Sources claim that both of Marjorie's ex-husbands were involved in crimes.

After her first husband, Jimmy Townsend, was arrested and charged with life in prison, she divorced him and married Darnell Woods.

Bridges is the third wife of Steve Harvey.  Marjorie has three children: Morgan, 29, Jason, 24, and Lori, 19, from her previous marriage. When Marjorie isn't busy raising her kids with Steve, she works as a fashion blogger.

marjorie_harvey & I teamed up with @zulily to create a stylish his & her #vday gift guide. Link in theladylovescouture bio. #valentinesday #steveharvey #marjorieharvey

Marjorie posted a photo of her 52nd birthday on Instagram.

Spent my birthday surrounded by my wife, all our children and grandkids. God is good. pic.twitter.com/K190Gt6KWC

Marjorie and Steve have four grandchildren, two through Jason's marriage, one through Morgan's wedding, and the last through Karli's marriage.

As of 2020, Morgan has more than 2.2 million followers on her Instagram account. There, she mostly shares her family photos.

Who Is Steve Harvey?

Steve Harvey is one of the veteran comedians. He also has built a highly successful path as a businessman and an entertainer.

According to celebrity net worth, Harvey possesses $180 million and is paid $45 million a year.