Steve Harvey And Marjorie Elaine Harvey's Marriage Details! Know All The Interesting Facts About The Family! 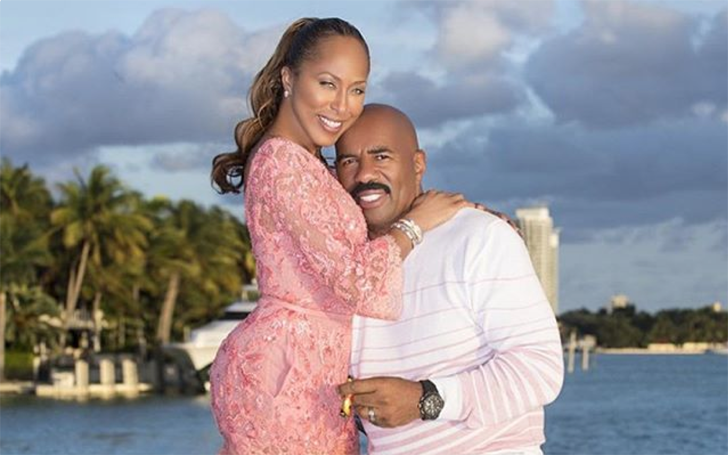 Renowned American comedian and television host Steve Harvey is a family man. He appeared on his own reality show Celebrity Family Feud as a participant along with his family on an episode of 30 July 2017.

Besides being a TV show host, Steve Harvey is also a producer, radio personality, actor, and an author. Steve is currently married to Marjorie Elaine Harvey, who is his third wife.

Marjorie is his third wife. They are married since 2007 and still together. Let's learn more about Steve and his family here.

Stevie and Marjorie first met in 1990 at a Memphis comedy club. The comedian had a love at first sight when he saw his future wife walking into the room, he shared the bit with essence.com in January 2014.

Steve was on stage when he told Marjorie:

I don't know who you are but I'm going to marry you.

Marjorie shared her side of the story, saying:

I knew he was The One shortly after I started dated him...but then he just left. Disappeared.

They split after dating for some time, however, they again re-collided in 2005, shortly after Harvey ended his second marriage ended with Mary Shackelford.

Steve and Marjorie dated for years before they decided to marry. In a 2010 interview with Essence, Marjorie said:

“We were friends. We dated years ago and I think it was the long distance more than anything with Steve and I [that made us go] our separate ways. Nothing happened. He didn’t break my heart. I didn’t break his heart. It just was a long distance relationship and someone would have had to make a decision back then."

Marjorie Elaine Harvey and Steve Harvey got married in 2007 and are together since then. They have seven children altogether.

Steve's twin daughters Brandi and Karli from his first wife Marcia Harvey, and his sons Broderick, and Wynton, from his second wife Mary Shackelford along with Marjorie’s children, Jason and Lori, from her previous marriage Morgan all make up the Harvey family.

The author of the best-selling 2009 book Act Like a Lady, Think Like a Man which is adapted into a blockbuster movie and its sequel, Steve Harvey, says his wife  Marjorie Elaine Harvey is the secret of his success.

Steve Harvey has been married for three times till date. He married Marcia in 1980. They together have twin daughters, Brandi and Karli. Steve and Marcia got divorced in 1994.

Steve Harvey got married for the second time in1996. He has a son, Wynton Harvey, with his second wife Mary Shackelford. The couple divorced in November 2005. after the divorce made a statement saying he chose the wrong partner.

I got married for the wrong reasons. I was tired of being alone. I have to own that. It was me, not her. But it was bad for a long time.

Harvey's second wife Shackelford sued him for $60 million in May 2017. She claimed that her life has been worst since their divorce in 2005. She said:

"Steve Harvey owes me $50 million and I want him arrested for violating my civil rights."

She also explained she wanted to charge her ex-husband with a constitutional rights violation, falsifying documents, perjury, contempt of court, extortion, and collusion.