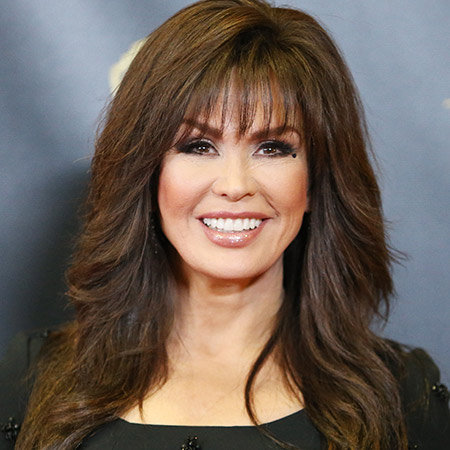 Marie Osmond is an American actress, singer, film screenwriter, doll designer, and a member of the show business family the Osmonds. She earned success as a solo country music artist in the 70s and 80s and is best known for her appearances in her musical career. Her best-known song is a cover of the country-pop ballad "Paper Roses". She and her singer brother Donny Osmond hosted the television variety show, Donny & Marie, from 1976-1979. She has received several nominations including two Grammy nominations and has won Country Music Association Awards for Vocal Duo of the Year in 1987.

She was born on 13 October 1959 in Ogden, Utah. She is the daughter of George Virl Osmond and Olive May. Marie was raised as a member of The Church of Jesus Chris of Latter-day Saints.

She is the only daughter among nine children of her parents and all of her brothers have maintained a career in show business, singing, and performing on national television. She studied martial arts under the tutelage of Chuck Norris.

In the year 1973, Marie Osmond had her first taste of solo success with her album ‘Paper Roses’ which climbed to number one on the country music charts. The album also broke into the top five on the pop charts.

In 1974, teams with one of her brothers Donny, she scored two pop hits ‘I’m Leaving It All Up to You’ and ‘Morning Side of the Mountain’. The sibling duo also introduced their own television show named ‘Donny & Marie’.

Donny & Marie Osmond had several guest stars on their shows including Andy Gibb, Paul Lynde, and Kris Kristofferson. By the end of the 1970s, they ended the show for the new beginning of their career.

Her show may have been ended, but Marie Osmond continued to enjoy some success on television. She also had her own limited-run variety show, ‘Marie’, and also made a series of television movies.

She was offered the lead role of Sandy in Grease (1978) but turned down the role on moral grounds: she disagreed with the character's decision to turn to bad behavior in order to woo a boy.

In 1979, Marie Osmond starred in ‘The Gift of Love’ with James Woods and Timothy Bottoms and she also went to play the role of her own mother ‘Olive’ in 1982’s popular show ‘Side by Side’. Reviving her country music career, she scored many hits in the 1980s.

She has also reached the top of the country charts twice in 1985 with ‘Meet Me in Montana’ and ‘There’s No Stopping Your Heart’.

Moreover, she also penned the books Behind the Smile: My Journey Out of Post-Partum Depression (2001), Might as Well Laugh About It Now (2010), and Marie Osmond's Heartfelt Giving: Sew and Quilt for Family and Friends (2010).

Marie Osmond's Net Worth And Salary

Marie Osmond has an estimated net worth of around $20 million at present, according to Celebrity's net worth. She is a very talented and hardworking person and has been an inspiration for many people out of others.

In the year 1978, Osmond collected a huge amount of $0.5 million from the album Goin' Coconuts (soundtrack) by Donny & Marie Osmond.

Marie gave birth to her son from that relationship on 20 April 1983 and two years later they got divorced. Again on 28 October 1986, she married Brian Blosil at the Jordan River Temple in Utah. The pair was blessed with two children Matthew Richard and Rachael Lauren.

Later, Marie Osmond adopted five children. However, on 30 March 2007, Blosil and Osmond announced their divorce. After the twenty-six years of her divorce from her first husband Stephen Lyle Craig, Osmond and Craig decided to give another chance to their marriage and the couple remarried on 4 May 2011.

They married in Las Vegas. Marie remarried her first husband wearing the same wedding dress that she wore when she was marrying him for the first time. It was surely a huge moment for both of them.