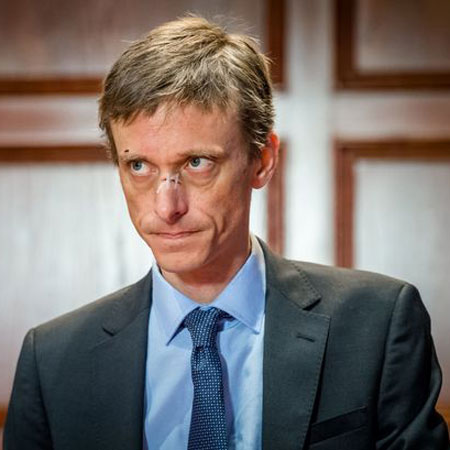 English actor, Mackenzie Crook is well-known faces in the entertainment field. He is an actor, director, comedian, and writer, best known for his portrayal of Gareth Keenan in the Pirates of Caribbean franchise.

Crook has appeared in the 2018 historical series, Britannia. His net worth is $4 million at present.

Crook is married and has two children. He currently resides in Muswell Hill, London.

Crook was born on September 29, 1971, in Maidstone, Kent, England. He is English and is of Caucasian ethnic background. He was born to Michael Crook and Sheila Crook. His father was an employee at British Airways, and his mother was a hospital manager.

Crook was put on a course of home therapy for three years due to growth hormone deficiency. He spent his early childhood days at his uncle’s tobacco farm in northern Zimbabwe. There, he developed his interest towards painting.

Crook started his career in 1998. He debuted in television appearing in Channel 4’s sketch show, Barking. He portrayed grotesque schoolteacher, Mr. Bagshaw in the series.

Crook made his first major TV role as a comedy sketch contributor on Channel 4’s late-night comedy series, The 11 O’Clock Show in 1998. Later, he was dropped from the show. He was cast as a member of the BBC sketch show, TV to Go in 2001.

Crook worked as the host of the short-lived ITV1 show, Comedy Café as Charlie Cheese. He appeared as Gareth Keenan in Ricky Gervais/Stephen Merchant popular mockumentary series, The Office. He received two BAFTA nominations for his performance in the series.

Crook rose to prominence after portraying Ragetti in The Pirates of the Caribbean franchise (2003-07).

Crook appeared as Launcelot Gobbo in Michael Radford’s film adaptation of Shakespeare's The Merchant of Venice.

Crook starred in several movies such as Finding Neverland, The Brothers Grimm, The Gathering, and short movies such as Ant Muzak and Blake’s Junction 7. He also lent his voice in a TV series, Modern Toss.

Crook played the main role as Paul Callow in the British comedy, Three and Out in 2008. The following year he played in the movies like City of Ember, Little Dorrit, and Love Soup.

In 2009, Crook appeared in many TV series such as Merlins, Demons, Skins, and Solomon Kane. He portrayed Rusell Hardy in the 2010 biographical movie, Sex & Drugs & Rock & Roll.

Crook portrayed Orell on the six episodes of the fantasy TV series, Game of Thrones (season 4) in 2013. He received nominations for Screen Actors Guild Award for Outstanding Performance by an Ensemble in a Drama Series for his performance in the series. His works in the year include Almost, In Secret, The Café, and One Chance.

Crook worked as writer and director for a British TV sitcom, Detectorists in 2014. He also appeared as Andy Stone in the series. The series was originally released on October 2, 2014, and aired until December 13, 2017. He received nominations for BAFTA Television Craft Award for Best Writing in a Comedy Series, BAFTA Television Award for Best Situation Comedy for his works in the series.

Crook played Veran in the 2018 historical period drama, Britannia. He appeared alongside David Morrissey, Kelly Reilly, Barry Ward, Annabel Scholey, and Eleanor Worthington Cox, among others in the series.

Crook stands the height of 5 feet 9 inches (1.7 meters). His net worth is $4 million at present. He has worked in many movies and TV series in his career.
Crook has appeared in many of the successful movies which made a good collection at the box office.

Crook is a married man and has two children. He married Lindsay Crook, a former advertising executive in April 2001. The couple is blessed with two children; a son and a daughter.

Crook currently resides in Muswell Hill, London with his wife and children. He owns an eight-acre piece of Essex woodland in London.