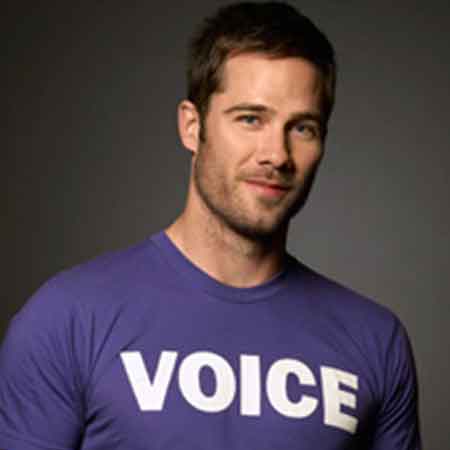 Luke Macfarlane is a Canadian-American actor who has been active in the entertainment industry since 2003 and is considered one of the successful Hallmark actors. He is widely known for his roles, Scotty Wandell on the ABC television drama Brothers & Sisters (2006–2011) and in the short-lived FX series Over There (2005) as Private Frank "Dim" Dumphy.

Besides that, the London-born actor is a former singer. He previously was a lead singer of the band Fellow Nameless, in his 8th grade at the Lester B. Pearson School for the Arts under the name Slipnaught.

Luke Macfarlane's birth name is Thomas Luke Macfarlane. He was born on 19th January 1980 in London, Ontario, Canada under the birth sign Capricorn. As of April 2022, his age is 42 and he stands at the height of towering height of 6 feet 2-inch or 188 cm tall.

Moving towards his academics, Luke went to the London Central Secondary School and then joined the Lester B. Pearson School for the Arts Elementary School, followed by Central Secondary school before being accepted into Juilliard for acting.

Macfarlane's parents are Thomas MacFarlane and Penny MacFarlane. His father was the Director of Student Health Services at the University of Western Ontario, whereas his mother, Penny is currently working at a London hospital as a mental health nurse.

Macfarlane spent his entire childhood alongside his twin sister, Ruth MacFarlane, and elder sister Rebecca. He is a Canadian-American citizen and he belongs to mixed ethnicity.

Luke immediately after the completion of his school level, started working as an actor for a local theater. Later on, he started going for TV and film roles auditions.

He began his acting career, appearing in the supporting role, PV2 Frank "Dim" Dumphy in the 2005 American action/drama/war television series, Over There. He then appeared with Cynthia Nixon in Robert Altman’s miniseries Tanner on Tanner.

Macfarlane’s first notable role Scotty Wandell was on ABC’s Brothers & Sisters from 2006 to 2011. He also played the leading role in the two-part miniseries Iron Road alongside Sun Li, Sam Neill, Peter O'Toole, and others.

Some of Mcfarlane's notable roles include NBC’s The Night Shift as Rick Lincoln, Satisfaction as Jason Howell, PBS’s Mercy Street as Chaplain Hopkins, and Syfy’s Killjoys as D’avin Jaqobis, and many more.

Moreover, he also starred in several stage play performances like Juvenilia, Where Do We Live, The Busy World is Hushed, and Dreamstuff, Reverberation, amongst others. His upcoming projects are BROS and Lone Star Bull.

Besides acting, Macfarlane is also a singer as well as a songwriter. He was the lead singer of the band Fellow Nameless, in his 8th grade at the Lester B. Pearson School for the Arts under the name Slipnaught.

Being an actor, Luke Macfarlane earns a good amount of money. His major portion of income comes from his appearance in movies and stage plays. Besides, he is also a singer and is associated with a few advertisements and endorsement deals.

As of April 2022, Macfarlane has an estimated net worth of $2 million as of Celebrity Net Worth. According to IMDb, the actor so far has a total of 33 movies and television shows under his name.

In the year 2008, he was cast in the biographical drama movie Kinsey which became instant hist the box office grossing over $16.9 million whereas its production cost is around $11 million. In the movie, he shared the screen along with Liam Neeson, Laura Linney, Chris O'Donnell, and Peter Sarsgaard.

Relationship Status: Is He Gay?

Luke Macfarlane is openly gay, which he admitted at The Globe and Mail in April 2008. He has been in several relationships with several celebrities.

Macfarlane’s first boyfriend Charlie David is a Canadian actor, writer, director, and producer. His most popular relationship is with American actor and model Wentworth Miller who is known for his role in the widely popular TV series Prison Break.

Wentworth and Luke have been secretly dating for almost six months now; they’ve been very quiet about their relationship, obviously, as Wentworth is not out of the closet

Later on, the couple Wentworth and Mcfarlane broke up for an unknown reason and after the separation, Macfarlane started dating semi-professional Wrestler-c u m-actor, Chad Slivenski but this also was for a short relationship.

In the past, he has been in a relationship, with TR Knight. As of 2022, he is possibly single, as there are no rumors of him being with anyone.

1. How much is Luke Macfarlane worth?

As of 2021, Macfarlane has an estimated net worth of $2 Million. His major portion of income comes from his appearance in movies and stage plays. Besides, he is also a singer and is associated with a few advertisements and endorsement deals.

Seth Macfarlane is an American actor, writer, and singer. Because of the same surname, people often confuse them as siblings, but they are not related. In fact, both of them have only sisters.

We have often seen Luke playing Cello in his different movie roles. He is a classically trained cellist.