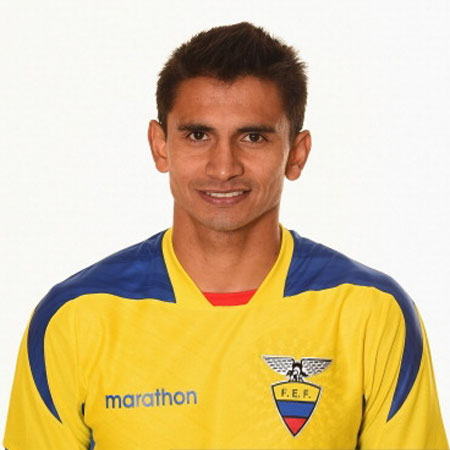 Attacking midfielder, Luis Saritama is an Ecuadorian footballer who has played in every Ecuador Youth national team, making an impact as having a notable pass speed, accuracy, response, and stamina.

Luis was born on October 20, 1983, in Loja, Ecuador. He is an Ecuadorian by nationality belonging to the White ethnicity.

Luis made his first international debut against Peru in 2003. He was re appointed into the Ecuador National team for the 2006 FIFA World Cup in Germany and appeared in the same year against Brazil in Sweden, Mexico in Oakland and U.S in Tampa Bay.

Luis has played 48 matches for the Ecuador nation with no goals so far. His club career started with Deportivo Quito in 2001 for which he played until 2004. He made 103 total appearances with 13 goals in this duration.

Luis next appeared in the Peruvian first division, where he appeared with fellow Ecuadorian footballer, Johnny Baldeon for Alianza Lima. Both their contributions led to Alianza’s run all the way to the finals and the club won the Clausura champions in 2005.

Luis then returned to Deportivo Quito in 2005 and made a total of 53 appearances with 12 goals. He was just 22 but was made the captain of the team and was used very frequently for the national team matches. It was evident at the time that Ecuador coach Luis Fernando Suarez intended on bringing him to Germany 06.

Luis returned to Alianza Lima in 2007 and stayed for the year with 20 appearances and 5 goals. On 2008, he captained Quito into winning their third title in history. After the 2006 FIFA World Cup, Saritama was signed by Tigres UANL.

Despite being one of the most popular players of the club and scoring few goals, Tigres suffered a horrible season and constantly became last in their group. It became clear that Luis was not included in their future plans.

Luis was subsequently transferred to Mexican giants Club America during winter for enforcing the team for its Copa Libertadores 2007 campaign. The contract was to tie him up with Estadio Azteca for four years only to participate in the Copa Libertadores games but was later allowed to play in official Primera Division de Mexico matches.

On January 2007, he scored a goal in his debut match against Sporting Cristal in the first round of Copa Libertadores. Having failed to produce impressive results, he was loaned to Alianza Lima where he played well and was loaned out to Deportivo Quito which is his current team.

On January 2013, Luis signed a three-year contract with LDU Quito and debuted officially in a Copa Libertadores playoff match against Gremio which was a win. He played 11 league matches there with a total of one goal.

As of January 2014, it has been confirmed that Saritama would join Ecuadorian giants Barcelona on loan for a year. Luis is nicknamed as El Sari, El Simbolo, and Saritama L. as per his shirt name. His Jersey number is No.9 and his strong foot is his right.

His attack and header accuracy are marked 75 and defence strategy is marked 74. His dribble accuracy, short pass accuracy and long pass speed are 83, 80 and 83 respectively which denote that Luis’s potential lies mainly in that area.

His short pass speed and long pass accuracy are both 78. His shot accuracy is 73 and place kicking is 72. His swerve is 76, ball control is 81 but his goal keeping skills is marked 50.

His weak foot accuracy and frequency are 5 and 4 respectively. His response, explosive power, dribble speed and top speed are marked 85, 79, 70 and 76 respectively. His body balance and stamina are 79 and 85 while kicking power and jump are 83 and 75.

His tenacity and teamwork are given 82 and 84 points. Luis’s relationship status is not much known about as is his current salary. But it is known that he was transferred to Barcelona with a transfer amount of 1 million Euros.

His height is 1.75 m and weight is 70kg. His current net worth is estimated to be 1.10 million Euros. This clearly indicates the skill he has portrayed and his contributions to the football fraternity in a career of 13 years.