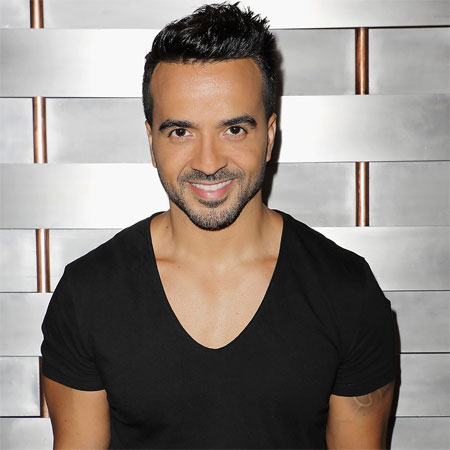 Grammy Award-winner, Luis Fonsi is a Puerto Rican singer, songwriter, as well as an actor. He is known for the hit song Despacito and earned two iHeartRadio Music Awards and four BMI Awards.  As an active person in this entertainment industry since 1998, Fonsi has appeared in several TV series. He is also well-versed with piano and guitar.

Fonsi married actress Adamari Lopez on 3rd June 2006. However, they filed for divorce after four years of their marriage. He then married Águeda López in 2014 and has a daughter, Mikaela and a son, Rocco.

Fonsi grew up along with his siblings, Jean Rodríguez, a singer, Ramon do Salotti and Tatiana Rodríguez. During his childhood days, Fonsi along with his family went to Orlando, Florida.

Since his early age, Fonsi dreamt of becoming a member of Menudo, arguably Latin America's most popular boy band in history, around the time he was ten years old.

Fonsi also joined the university's choir, which let him travel & perform around the world, and recorded demo tapes in Miami. Soon, he was offered a recording by Universal Music Latin.

In 1998, Luis Fonsi recorded his first debut album Comenzaré (I Will Begin). The album reached #11 on Billboard's Top Latin Albums Chart and was a huge hit in Puerto Rico and across Latin America.

In the year 2000, Ednita Nazario was honored with Latin Grammy Award for a song, Cadenas de Fuego which was composed by Fonsi. After that, his fame reached Europe, and he became a celebrity in Spain as well.

In 2003, Fonsi released the song' Abrazar la Vida' (Holding on to Life) which became a huge hit around Europe.

In 2009, Luis Fonsi won a Latin Grammy Award for Song of the Year for his composition "Aquí Estoy Yo." In January of 2017, "Despacito" starring Daddy Yankee was released. The songs are now one of the most viewed songs on YouTube.

In April of 2017, the song was given an English remix featuring Canadian singer, Justin Bieber which reached number one on the US Billboard Hot 100 for a week, making both Fonsi & Yankee's first number one on the chart, and Bieber's fifth.

Besides his singing career, Fonsi debuted in the TV serial drama "Corazones al límite" as Roy in 2000. He also appeared on the Nickelodeon television series, Taina in 2001, alongside Christina Vidal, Selenis Leyva, David Oliver Cohen, and others. Fonsi entered the cast of Broadway's' Forever Tango' for a two-week engagement in August 2013.

As of 2019, Luis Fonsi has an estimated net worth of $16 million. His video channel has earned an estimated  $12 to $16 million, primarily from Despacito, on an average. He also earns from ‘Despacito’ on Spotify, Apple, and other streaming channels, also withstanding live performances & merchandising tie-ups.

Fonsi has originated a brand of Vodka (Pure Wonderfonsi - Puerto Rico"). He is tackling the juniors market with a top-selling perfume (With Love from Luis) & a fashion line called “Luis Fonsi Seduction.”

Furthermore, he purchased a lixurious house in Miami, the USA which costs millions of dollars. Also, he is a huge fan of Air jordan shoes which price starts from $305 in the market.

On June 3, 2006, Luis Fonsi married his girlfriend, Adamari López in a religious ceremony in Guaynabo, Puerto Rico. The ceremony was attended by several stars such as Ednita Nazario, Charytin, and Carlos Ponce. However, after living together around four years, the duo officially divorced on November 8, 2010.

Later, Fonsi began dating Spanish model, Águeda López. The pair married on 10th September 2014 after living together for three years. Beyond that, the duo welcomed their first child; a girl, Mikaela in December 2011 in Miami. They welcomed their second child, a son, Rocco On December 20, 2016.