Lionel Messi And Wife Antonella Roccuzzo: How It All Started? Details On Their Love/Married Life, Family, And Children

When we talk about successful professional career and balanced personal life side by side, one cannot forget about Lionel Messi who is Argentine professional footballer, captain for Barcelona and Argentina national team.

Lionel is living a blissful married life with his childhood-sweetheart-turned-wife Antonella Roccuzzo and children. Get a quick glimpse on their love-married life, relationship, children, and more:

Antonella Roccuzzo has always been Lionel Messi’s first and ultimate love. He fell in love with her before he was in love with football.

The super-power couple started dating in 1996 when Messi and his friend Lucas Scaglia (Antonella’s cousin) began spending time together. Antonella then joined them when they visited the shore of the Parana river.

During that time, Messi was only nine years old. He wrote love letters for her as a child, but their relationship took a pace when he turned 21. 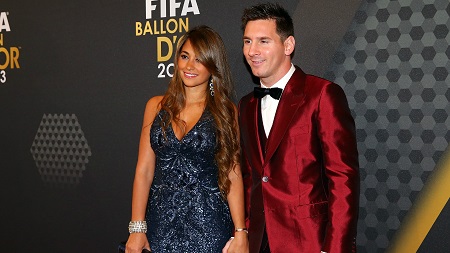 Actually, Antonella was previously in a relationship with Rosario neighbor. The pair dated for around three years. Later, her then-boyfriend passed away in a traffic accident in Argentina, and since then, Messi has not left her side.

Sources have confirmed that the duo started dating in 2008 and began making a public appearance in 2010 FIFA World Cup. It was the time when Antonella moved to Barcelona for the very first time and moved in together.

Messi and Antonella got married on 30th June 2017 at a luxury hotel wedding ceremony at Hotel City Center in Rosario in front of 260 guests. They banned their guests from taking any photos at the event.

Messi and Antonella are parents to three children. In 2nd June 2012, Messi hinted that his partner was pregnant by placing the ball under his t-shirt while celebrating a goal in a 4-0 win against Ecuador.

After two weeks, he confirmed the pregnancy news in an interview. On 2nd November 2012, the couple welcomed their first child, son Thiago Messi. 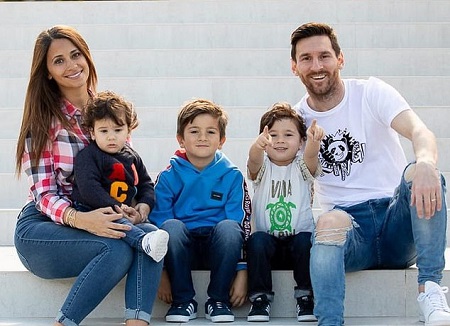 CAPTION: Lionel Messi with his wife and children SOURCE: DailyMail

In April 2015, Messi took his Facebook to announce that he was expecting a child with Antonella. The pair’s second child was born on 11th September 2015 in Barcelona.

Three months after tying the knot, Antonella announced that she was pregnant with the third child via an Instagram post on 15th October 2017. Their third child was born on 10th March 2018 and announced the happy news via Instagram.

For now, the family of five is leading a healthy familial relationship.