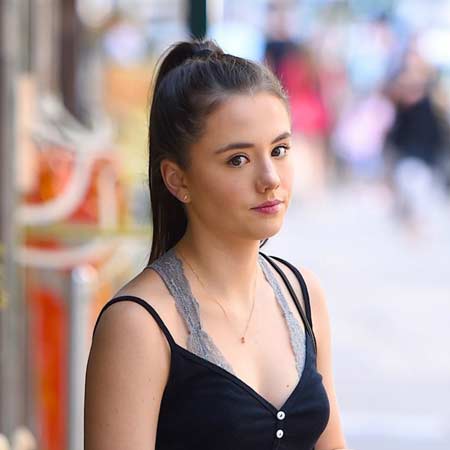 Lily Mo Sheen is an English actress residing in Los Angeles known for being cast in movies like Underworld: Evolution, Click, and Everybody's Fine. Sheen debuted in the movie industry in 2006 with action & science fantasy movie Underworld: Evolution playing her mother Kate's younger self.

Lily Mo Sheen was born to Welsh actor Michael Sheen and famous actress Kate Beckinsale on January 31, 1999, and is currently 19 years old. She was born in London, England and is currently residing in Los Angeles, California. Her parents separated when she was four years old in the year 2003 after being in dating relationship for more than eight years. She is of English nationality and belongs to white ethnicity.

She attended the school for gifted children and then enrolled at the Harvard-Westlake School in Studio City from where she graduated in 2017. Her estranged parents reunited on Lily's special day 'graduation day' to congratulate their daughter.

She got accepted to New York University, college of her choice during her graduation but the subject on which she is going to receive her Bachelor degree is unknown. It was indeed a proud moment for her parents.

Lily Mo Sheen is an actress by profession and has appeared in some movies as of 2018. In 2006, she debuted in the movie industry appearing in Underworld: Evolution as her mother Kate's younger version. Her father Michael was also a cast in the movie as Lucian.

She also appeared in Everybody's Fine as her mom's young self, with famous actors like Robert De Niro and Drew Barrymore.  In 2006 she played a  girl in the lakeside camp in Click alongside Adam Sandler, Christopher Walken, and David Hasselhoff.

Lily Mo Sheen's net worth is expected to be around thousands of dollars at present. She earned a decent amount as a cast of the box office hit movies when she was in her early teens. The annual tuition fee of the school she graduated from named Harvard-Westlake is $35,900.

The movie Click in which she appeared earned a box office collection of $237 million while her other movies Underworld: Evolution and Everybody's Fine collected $113.4 million and $15 million respectively.

Lily Mo Sheen currently resides in Venice, California with her mother and stepfather. She is the only child of her parents.

Sheen is the stepdaughter of famous director Len Wiseman, creator of the Underworld series and half-niece of Samantha Beckinsale.

Her mother Kate married Len Wiseman on May 9, 2004, after separating from Sheen's real dad Michael in 2003. The marriage lasted many years but they divorced in November 2015. She had a pet rabbit which she named Bob which she loved dearly. Sheen also has a cat and an orange Pomeranian dog.

Her grandparents are Meyrick Sheen and Irene Sheen & her maternal grandparents are Richard Beckinsale and Judy Loe. On the Jimmy Kimmel Live Show, Sheen's mother Kate revealed that Sheen has a crush on Jimmy Kimmel. Sheen posts many photos of her friends, travel, and pets on her Instagram.