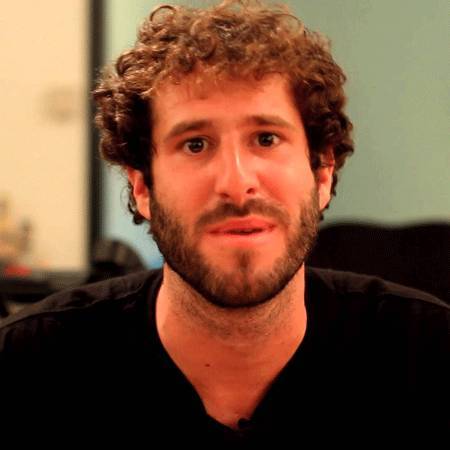 David Andrew Burd aka Lil Dicky or LD is one of the familiar faces in the music industry. Along with rapper, Dicky is also a comedian who rose to fame after releasing a music video for his song, Ex-Boyfriend, which went viral overnight. The video earned millions of views on YouTube in just 24 hours.

In 2015, Dicky released his debut album, Professional Rapper. He then released various singles from where he is making an impressive net worth.

Lil Dicky was born David Andrew Burd on March 15, 1988, in Cheltenham Township, Pennsylvania in an upper-middle-class Jewish family. Ever since his childhood, he is very close to his parents. Dicky completed his schooling from Cheltenham High School. According to him, he used to get good grades at his high school. He says,

''I was a pussy. I was really awkward looking. I wasn’t getting any girls at all, but I was very class-clownish and I got good grades.''

From the early age, Dicky was interested in music. When he was in the fifth grade, he started rapping.

I’ve decided that I will be putting the new song and video out on March 15, in an effort to get as much love and attention on my birthday as humanly possible. Sorry about the delays. The good news is, it’s literally the best music video of all time

Dicky started reimagining his monthly progress reports as a rap video due to which the ad agency Goodby Silverstein brought him to work in the creative department where he wrote copy for ads such as the NBA’s “BIG” campaign. Since then, his musical talents began to shine. He wanted to write movies and shows as well as act. That was why Dicky initially got into rapping so as to get attention as a comedian.

In May 2013, Dicky released a music video for his song, Ex-Boyfriend which went viral overnight and also earned millions of views within 24 hours of being posted on YouTube.  He rose to fame after the release of the music video.

Dicky's debut mixtape was So Hard(2013). At one point, he ran off the money so introduced a Kickstart campaign from where he rose money for his album and songs. In 2014, Dicky made his first live performance at The Theater of Living Arts which certainly increase his popularity and wealth. His debut album was Professional Rapper that got released on 2015.

Lil Dicky's name got included in 2016 Freshmen line-up released in the XXL Magazine on June 13, 2016, along with Kodak Black, Lil Uzi Vert, Dave East and Lil Yatchy among others. His latest musical tours were Dick or Treat Tour(2016) and Looking for Love Tour( 2015). He wants to be known as a comedian, actor, and writer along with a rapper.

The following year, Dicky released a music video for ''Pillow Talking.''  The special effect on the music video help to make it the 49th most expensive music video ever. The same year, he released an EP, I'm Brain.

Yall got me feelin like wilt chamberlain out here #100 #ThankYouAll

On 15th March 2018, Dicky released a single, Freaky Friday with a video featuring Chris Brown. The next month, the video reached over 100 million views and also hit the Billboard charts of the United Kingdom and New Zealand.

Besides, Dicky has a self-titled YouTube channel which has over 3.3 million subscribers.

The rapper, Lil Dicky has not married yet. As of 2018, Dicky is more concerned about his career so, he might be possibly single. Previously, he dated a lady named, Molly to whom he even dedicated a song and a music video. But the relationship between them did not last long and broke up for some undisclosed reasons.

Lil Dicky is famous on the social media website. The 28-year-old uses social media to interact with his fans and he also raised funds by Crowd Funding online.

Dickey is nicknamed as LD. He has worked with various big names like T-Pain, Fetty Wap, and Snoop Dog. As per him, his musical inspirations are Donald Glover, Drake, J.cole as well as ASAP Rocky.

Lil Dicky has an athletic body and stands very tall with a height of 5 feet and 9 inches.

As per Celebrity Net Worth, Dicky has an estimated net worth of $8 million. He is making an impressive amount from his music career. Here is the list of his songs and album that made massive sales:

At one point, after falling short of money, he launched a Kickstarter campaign stating that he had officially run out of money. As a result, crowdfunding raised $113 thousand exceeding its target of $70 thousand. This fund was used to create and produce music and music videos.

Here is the video which shows facts about Lil Dicky: