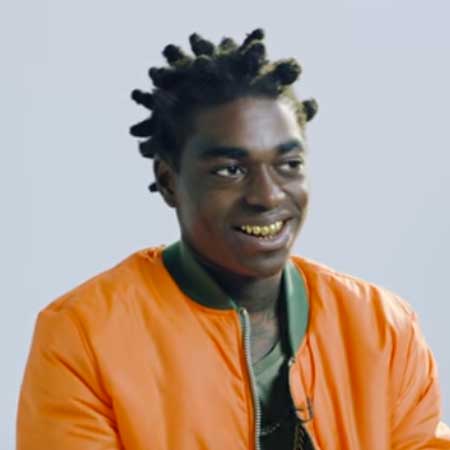 Kodak Black is an American hip hop artist, and rapper. He is recognized by his stage name Kodak Black. He has released several albums and mixtape in his career. He is best known for his song, No Flockin. He debuted his career with the studio album, Painting Pictures that ranked at #3 on US Billboard 200 charts.

The rapper has faced several legal issues and has a history of run-ins with the law. Currently, he has been taken to the Broward County Sherrif's Office in Florida, as he was arrested on seven felony charges.

Kodak Black was born on June 11, 1997, in Pompano Beach, Florida, U.S. He is American by nationality belonging to the Afro-American ethnicity. His real name is Dieuson Octave.

His parents were immigrants from Haiti. He has an elder brother named John Wicks and also has a younger brother.

Kodak Black used the nickname “Black” from the age of six. He also used the nickname “Lil’ Black” and chose the username “Kodak Black” when he joined Instagram. This later became his stage name, as he started to rap with the name and a name was favored by his fans as well.

Kodak Black released his first mixtape, Project Baby in December 2013. Later, he released other mixtapes like Heart of the Projects in 2014 and Institution in 2015. Canadian rapper Drake posted a video of himself dancing to one of his song, Skrt in October 2015. The video helped him to earn more popularity in the entertainment field.

The following month, Kodak Black also signed a contract with Atlantic Records. He was named one of XXL magazine's "2016 Freshman Class".

He broadcasted an Instagram Live video of himself in a Washington, D.C hotel room with several other men, while a lone female performed oral sex on them.

Kodak Black has reached the age of 20 now. His birth sign is Gemini. He currently resides in Pompano Beach, Florida.

Talking about his personal life, he is unmarried and has not been in a relationship for a long time. He has not mentioned about having a girlfriend in his life.

Kodak Black was linked to Instagram model Cuban Doll in 2017. He shared a video on YouTube on November 29, 2017. The Florida rapper appeared to be engaged to Cuban in the video.

Kodak Black has stated that he was inspired by popular rappers Boosie Badazz and Chief Keef. His music is frequently based on previous and future criminal misdeeds.

Kodak Black has faced several legal issues and has been arrested multiple times in 2017. He was placed in a youth detention center three times in one year, and then placed on probation.

Kodak Black was arrested in Pompano Beach in October 2015. He was charged with robbery, battery, false imprisonment of a child, and possession of cannabis. Lare, he was released.

Kodak Black was arrested in Hallandale Beach, Florida in April 2016. He was charged with possession of a weapon by a convicted felon, possession of cannabis, and fleeing from officers.

The following month, Kodak Black was arrested and taken to Broward County Jail, Florida. He was charged with armed robbery and false imprisonment and was detained in custody. He was released from the jail in June after violating his house arrest.

Kodak Black was arrested in May 2016, for possession of a firearm by a delinquent armed robbery, false imprisonment, attempting to elude law enforcement.

The following year in October, he was accused by a South Carolina jury for first-degree criminal sexual conduct after allegedly assaulting a teenage girl at a hotel. He was released on $100,000 bail on December 1, 2016. The bail was declared under one condition that he faces up to 30 years imprisonment if convicted.

The rapper was recently arrested on January 18, 2018, on seven felony counts. His house was raided by a swat team when he was on Instagram live. As per the report by New York Daily, he has been taken to Broward County Sheriff's Office in Florida.

Kodak Black was alleged of many charges; grand theft of a firearm, possession of a weapon by a convicted felon, possession of marijuana, child neglect, and probation violation.

Kodak Black stands the height of 1.7 meters (5 feet 9 inches). He has a good income from his career. As of 2018, he has the net worth of $600,000 as per the reports by celebritynetworth and earthnecklace. He has successfully maintained the net worth in five years.

Most of his money comes from his six mixtapes, studio album, and multiple singles that ranked well in Billboard charts.

Kodak Black owns a luxurious house in Florida, which was recently raided by the police, resulting in his recent arrest.

He has been ordered to pay $4,200 to his baby mam Jammiah Broomfield as a monthly child support. However, he agreed to pay the money directly, twelve times a year, until 2033.