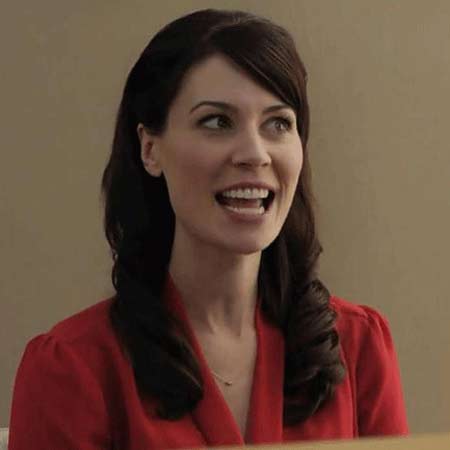 Laurel Coppock, an American actress, is known best for her work in the rom-com movie Crazy, Stupid, Love. She is working for movies and TV shows since 2007. She made her film debut in the 2008 film Food Chain. She then appeared in a TV series The Daily Habit in 2008. Later, she shared a big screen with Hollywood hunk Ryan Gosling and Emma Stone in Crazy, Stupid, Love in 2011.

Regarding her personal life, Laurel Coppock is married to her boyfriend turned husband, Bobby Mort with whom she shares a child. As of 2019, she is expecting a child.

Laurel Coppock was born on August 22, 1970, on the East Coast, United States of America. She is the daughter of a dancer and Broadway actress Susan Coppock. She spent most of her early days growing up in her hometown East Coast along with her family.  She belongs to Ameican nationality and regarding her ethnicity, she is a White American.

Coppock has two siblings; Selena Coppock and Emily Coppock. Her elder sister Selena is a stand-up comedian and an author while her younger sister Emily is an art appraiser and dealer.

It is said that her whole family is creative and therefore creativity runs in their veins. Coppock attended Circle in the Square Theater School for developing her acting skills and is a graduate of Colby College.

Laurel Coppock started working in Hollywood in 2007. She made a guest appearance in a mini-series, Derek and Simon: The Show. Following year, she made her film debut in the TV movie Food Chain. She also featured as a Cheerleader in a TV series The Daily Habit in that year. In 2011, she appeared alongside Ryan Gosling and Emma Stone in a rom-com film Crazy, Stupid, Love. From 2016-17, she appeared in a TV series Mike Tyson Mysteries.

Coppock is acclaimed for starring in numerous TV series including Modern Family, Arrested Development, Hart of Dixie, and 2 Broke Girls. From 2016-17, she played a guest role in two episodes of the TV series Mike Tyson Mysteries. Moreover, Coppock has also appeared in Toyota’s commercials and she is known as Toyota  Jan in Toyota’s auto world. She is also a founding member of the sketch and comedy group The Groundlings.

Laurel Coppock is also noticed for her commercial ad Toyota. She is therefore known as “Toyota’s Jan” where she can be seen receiving numerous calls from Toyota’s customers willing to learn information on Toyota’s Annual Clearance Event.

Coppock was also featured in Toyota’s second commercial “Science Project”. Besides, she is also a founding member of the sketch comedy non-profit theater group The Groundlings, known for the sketch and comedy groups in the country.

Her group The Groundlings is also co-founded by the former SNL cast members like Kristen Wiig and Will Ferrell, talk show host Conan O’Brien and Jimmy Fallon.

According to a source, TV stars paid nearly $150K to $1 million an episode on the basis of their experience and acting skills. Moreover, she also earns much from her TV commercial for Toyota. She also featured in another Toyota commercial, Science Project.

Further, she is the founding member of the company, Grounding which is known for presenting comedy and sketch groups across the country. Besides, Coppock has a lavish car manufactured by Toyota. She also brings a good amount of money from her ad commercial contracts with Toyota company.

She had a significant role in the movie, Crazy, Stupid, Love in 2011. She was cast alongside famous celebrities like Steve Carell, Ryan Gosling, and Emma Stone. The movie was a great success and grossed $142.8 million worldwide. With such earning, Coppock is maintaining her lavish lifestyle.

The 49 years old, Laurel Coppock is a married woman. She has been married to her boyfriend turned husband Bobby Mort for a long time. The couple had an affair for months before tying the knot. Her husband Bobby Mort is also an actor and is famous for appearing in the movies such as Beatdown and Locked Down.

The husband-wife couple loves cares and supports each other. There is no issue heard or read about them.

Laurel Coppock and her husband is blessed with a child.  They have not revealed the gender of their baby but the couple feels blessed to have the child in their life and says the child has made their bond even stronger. In March 2018, she announced her pregnancy by flaunting her baby bump. After a few months, they welcomed their first child, a son.

It was reported that she named her children, Camry and Sienna but she has not revealed yet. The whole family is living a lavish life together. Despite her busy schedule, she somehow manages to give proper time to her family. Along with being a successful actress, she is also a loving wife and caring mother. And it has been a long time that the two are still together and living happily with her family. Therefore, it is quite safe to a s sume there is no conflict between the couple.

Coppock is quite less active on social media who rarely shares her personal things with the media.

Here are the interesting facts about Coppock, you need to know.