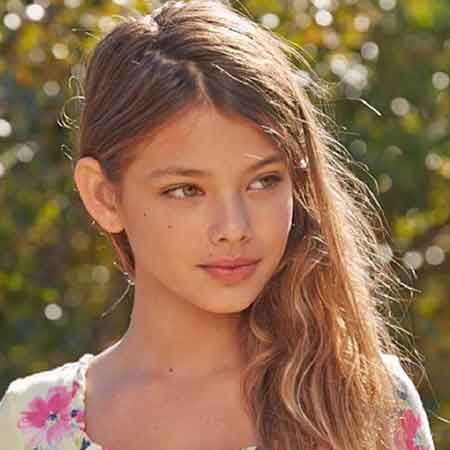 California born Laneya Grace is one of the promising figures in the modeling field. Starting her career at the tender age of three, Grace is a s sociated with Wilhelmina Models and has been featured in campaigns by GUESS and Maleficent Toys. She is also an actress, recognized for her appearance in Avicii's song Wake Me Up (2013). Her charisma, attractiveness and cherubic personality are some of the reasons for her popularity in the world of fashion.

Leneya Grace was born on 23 June 2004 in SanFranciso, California, the USA under the birth sign of Cancer. She spent most of her early childhood days in her hometown SanFranciso with her family. From a small age, she was involved in the modeling field.

Her father Thomas Stevenson has supported Grace since the beginning. however, her mother's name is not known. She has one younger sister named Kay.

Talking about Grace's educational qualification, Grace is studying at middle school. Grace holds American nationality and regarding her ethnicity, she is mixed.

Grace started her career in modeling at the age of three and has been a favorite of top photographers and agents. The year 2019 marks her 13 years in the modeling profession.

Her parents took a few beautiful pictures of Grace at Capitola beach and sent them to Ford Modeling. The agency loved those photos and after a few months, Grace was called up for her first shoot with Macy's.

Moreover, she was featured in the music video of the late Electronic dance music artist, Avicii song Wake Me Up. She was featured along with Aloe Blacc and Kristina Romanova.

As of now, she is modeling for Wilhelmina Models and has been featured in campaigns by GUESS and Maleficent Toys.

The young and charming child model earns a decent salary from her modeling career, however, her net worth is not estimated and is still not under review.  As per sources, the child model earns averagely $1,000 and $1,200 per day, so might be she earns in the same range.  There is no doubt she is living a lavish lifestyle with her family.

She has worked as a Wilhelmina Model and has campaigned for several brands including Guess and Maleficent Toys. She has also appeared in a music video. Her oozing charm and charismatic personality are evident from her photographs that say a lot about her delightful demeanor and fascinating looks.

As of 2019, the emerging model has over 353k followers on her Instagram. Since the past few years, Instagram has been becoming one of the essential mediums of earnings. Thus, it plays major role in her earnings.

Laneya Grace is dominating the modeling industry with her photogenic looks, mesmeric smile, glittering green eyes, and radiant personality. While other models have their share of ups and downs before making it to the road to stardom, this does not hold true for Laneya as she was born a star.

Laneya Grace just entered teenage but is already a known figure in the modeling field. It wouldn’t be wrong to state that she was born with the natural ability and talent for modeling. She is every photographer’s delight. The comfort with which she acts in front of a camera is praiseworthy for her age.

The information about the love affair and boyfriend of Grace is not disclosed yet. It is too early for Grace to understand relationships, she still has a long way to go.

She enjoys drawing, swimming, and reading, as well as Muay Thai and boxing. Gigi Hadid is her role model and her dream destination is London.

She currently resides in Texas.

Let's check out the video of Laneya Grace