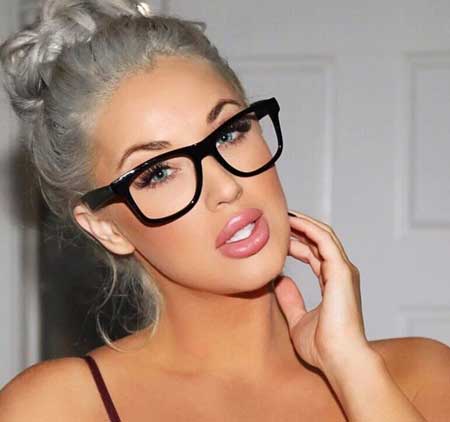 The self-made star, Laci Kay Somers is a model, You Tuber, and also an Instagrammer. The sensational model has been featured in several famous publications like Playboy and GlamRock Magazine. She also has a YouTube channel where she posts several blogs and singing videos.

Who is Laci Kay Somers?

Laci Kay Somers was born on 7th December 1991 in California, United States of America. Somers is Sagittarius which defines her personality to be curious and energetic. As per nationality, she is American as far as her ethnicity is concerned, she is White.

Somers started singing from a very early age with her sister. Her electrician father also helped her to focus on her dream.

Her parents raised her with her sister, Stefani Somers. Besides, Somers is a registered nurse. She then started working as an event host and ring girl for MMA fights.

Somers started her modeling career by exploring herself on her social media. Moreover, she also posted her first modeling job video on her YouTube channel in 2010 which is deleted now. Further, she featured in several publications including Playboy and Glamrock Magazine. She also featured on MMA Strikeforce.

Regarding her YouTube career, she posted her first video, Laci Kay Somers Boob Vlog on 10th January 2016 which gained over 371k+ views. Through the video, she helped those women who had questions about breast augmentation.

Somers then posted several videos and blogs on her channel and among all those her two videos ''Getting waxed, what females go through. *educational*'' and ''Mys sister got her Vagina Waxed! Haha'' got over 20 million+ views. As of September 2018, her YouTube channel has over 316k subscribers and millions of views.

Currently working on some originals but in the meantime I'm busting out my own version of some covers. If there is something that you are pa s sionate about pursue it with all you've got, because if you don't, you will never truly be happy. Music is something that chose me, it runs through my veins and I have a burning desire to sing and share it with you guys and this is only the beginning. This is my version of Fake Love by Drake, do you wanna see the full version on YouTube? - Guitarist: @zachsalter_

Besides, she is also involved in singing. She posted several videos of her performing and playing guitar on her channel. In 2017, she released her first song and music video, Turn Up. As of 2018, she released two music videos BAD and Let You Go.

Apart from all these, Somers also hosted the reality TV show, What's IN My Pocket? and also acted on the doc u mentary TV series, Inside Edition.

According to Celebrity Net Worth, Laci Kay Somers has an estimated net worth of $8 million as of 2019. Back two years ago she uses to have her net worth only in six-digit numbers. In around 2016, she uses to hold around $200 thousand. So in the gap of a year, she has earned a huge amount.

Her major sources of income are her modeling and YouTube career. As per some online sources, a Playboy model in the United States makes an average salary of $29,361.

As per socialblade.com, Somers earns $332 to $5.3k monthly and $4k to $63.8k yearly from her YouTube channel. Moreover, she also earns much from her posts on her Instagram.

According to the source, an Instagrammer with followers between 50k to 200k can make thousands per post and Somers currently has more than 9.8 million followers.

With such income, she became one of the top 10 highest paid Instagram models.

What Is the Relationship Status Of Laci Kay Somers?

The Playboy model, Laci Kay Somers is yet to be married. Somers is private when it comes to her personal life and relationship. It is hard to believe that the model with such an eye-catching portfolio has no boyfriend. Among her millions of male fan following, anyone would fall for her but she prefers to be single.

In an interview when she was asked about making boyfriend, she told,

''There are so many fake people out there who want to be around you because you’re social media famous. It’s difficult to find real people who are genuine and have good intentions. I keep a really tight circle these days and don’t let many people into my personal life.”

As per her, she wanted a real man who would be by her side and would never cheat her. She added,

'' I love guys that lift,  have tattoos, a personality and who can make me laugh.''

Previously, she was linked to professional American golfer, Tiger Woods. Both of them, however, has not spoken anything about their relationship.

Furthermore, she is close to an adult model, Amy Jackson.

Regarding her body structure, many people accused her of having plastic surgery which turned out to be true. During an interview, she revealed about her boob job, lip job, botox, and eye filler.

Further, she is a fitness freak and spends much of her time in the gym.

Check out the interview with Laci Kay Somers: