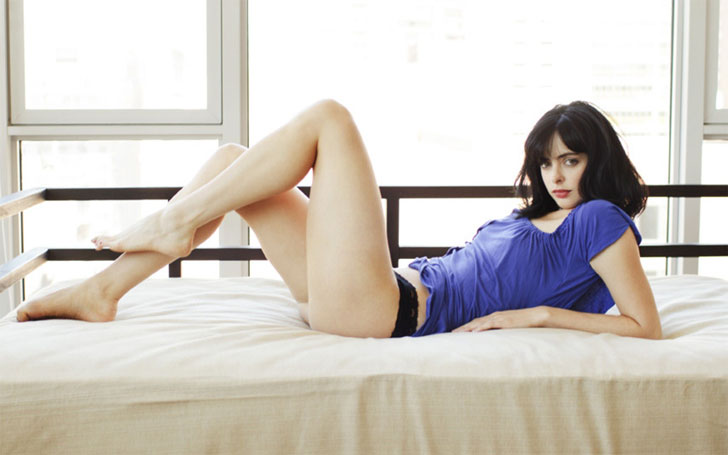 Krysten Ritter's complex feminist character in the trending NetFlix series, Jessica Jones, has won millions of hearts making it one of the top rated web series (8.2 ratings). And now she stars in its spin-off The Defenders as the lead.

Hollywood's rising actress, Krysten Ritter who has had roles in movies like What Happens in Vegas alongside Cameron Diaz and Confessions of a Shopaholic where she played lead  Isla Fisher's best friend among others, has come a long way- in her professional and personal life. The 33-years-old actress who has bagged the leading role on The Defenders is also in love! Yes, Ritter is dating, she has a man in her life!

It all started when Krysten became a fan of a rock band who had contacts with the singer Adam. The duo somehow got in touch leading Krysten to attend some of his shows. Eventually,  Adam Grandunciel and Krysten Ritter fell for each other and have been dating since 2014.

Showing teeth and rocking shades with my fave

The duo made their relationship public back in August 2014-  US Weekly reported that an insider told them pair is having fun and spending quality time together.

Also, just last year in March, the hot actress was seen enjoying her romantic getaway in Cancun wearing a steamy bikini with her beau Adam, beating off the blistering hit on the beach.

Krysten Ritter and her beau Adam Granduciel couldn't take their hands off of each other- it seems like the couple is really serious about their relationship. Rumors about them getting engaged swirled up in the media earlier this year but nothing concrete has come out of those rumors yet.

Well, fans are eagerly waiting for this powerhouse couple's engagement, do you think they'll get married anytime soon? Let's wait and see!