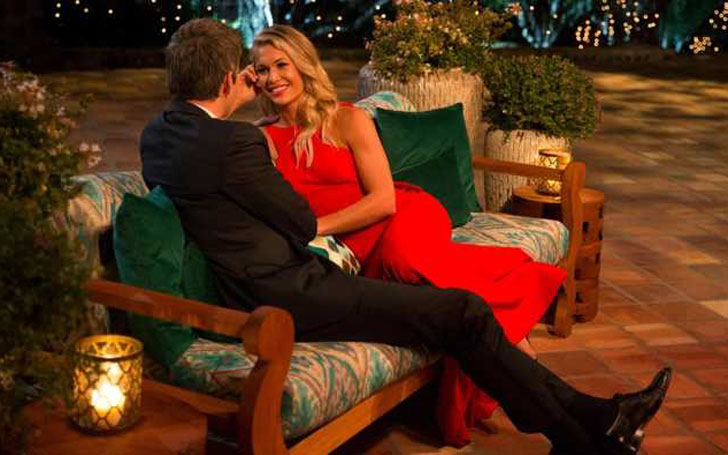 ''This is the most important race in my life'', says the 36-year-old race car driver, Arie Luyendyk Jr., he is all set to find his future wife on the ABC reality show, The Bachelor's 22nd season.

And, does he have a pick already? Well, from what we have seen so far ( we are in episode 4 so far), Luyendyk Jr. is fixated on Krystal Nielson how do you explain flying her to his hometown on the first date and justifying everything about Neilson that others find troubling?

It looks like our Bachelor might be falling in love! Let's take a look at Arie and Krystal's journey on The Bachelor!

Krystal Nielson and Arie Luyendyuk Jr.'s Journey On The Bachelor 22

Viewers have already witnessed the connection between Arie and Krystal on The Bachelor; Arie clearly prefers her more than the other contestants.

On their first one-on-one date in the second week of the reality dating show, The Bachelor, Arie took Krystal Nielson to his Arizona hometown where he met Arie's parents, brother and his sister-in-law. She also made a trip to his high school. And, that was date one!!

According to a source, soon after the date, Arie knew Nielson was “emotionally ahead of the other women,”

She knows his family so he thinks she knows him best.

Due to the growing bond between Arie and Krystal, the other remaining 12 contestants are growing quite concerned and upset, according to a source "they think she’s disrespectful toward Arie.''

Krystal and Arie on Episode 4 of The Bachelor

Arie Luyendyuk Defends Krystal Nielson: Will Arie Support Her Until The End of The Show?

We saw definite tensions between Krystal and Arie on 22nd January episode, on Monday night rose ceremony the fitness guru pulled Arie aside even though he had decided to forgo the cocktail party.

Arie Luyendyuk and Krystal Nielson on The Bachelor, Source: US Weekly

Talking about the incident on The Ben and Ashley I Almost Famous  podcast, the race car driver said, ''I don’t know actually know why she did that, to be honest because that week wasn’t a hard week for us.''

I just feel like she saw other relationships forming and she had that early one-on-one, so it’s probably hard for her to really adapt to being on these group dates.

While Arie admits that there is going to be more turbulence in his relationship with Krystal on the 29th episode, ''We do have some conflict next week, but, you know, I know it’s so cliche to say, but she wasn’t there to make friends'', he continues to defend Krystal.''

Krystal Nielson on The Bachelor

Defending Krystal even further while explaining why he favors her, the real-estate agent said,

She put our relationship first and that caused some conflict and I think that there is something to be said about somebody that fights for the time that you get together, because you do have such a limited time.

Arie also addressed Krystal's sultry voice which has been become a topic of comedy among famous late night show hosts like Jimmy Kimmel who called her voice ''The most annoying voice in TV history.''

The race car driver talked about Krystal's voice in a positive light, ''I mean, I don’t think it’s that bad. I know you guys think it’s terrible, but I often found it to be sweet.'' Later, he gushed while admitting that he thought Nielson was the best dressed first night- “because the red really popped out.''

As per US Weekly, in the upcoming episode during a group date, “Krystal gets mad when Arie invites all the women to an afterparty originally meant just for the winners. She calls him a liar, locks herself in her room and refuses to come downstairs.”

Guess what happens then? Luyendyk obviously comes to his favorite's rescue. The insider says, “Arie gives in and goes to find her.''

“Krystal wants Arie to seek her out in a crowd — she doesn’t care what the other women think of her'', the source adds.

The contestants have dubbed Krystal Nielson as the season's ''villain'', but she has The Bachelor's heart! And she fights for her man!

Looks like we are going to see more of Krystal in upcoming episodes, and definitely hear more of her 'sultry' voice! And, Arie will not send Krystal home, at least not in the upcoming episode.