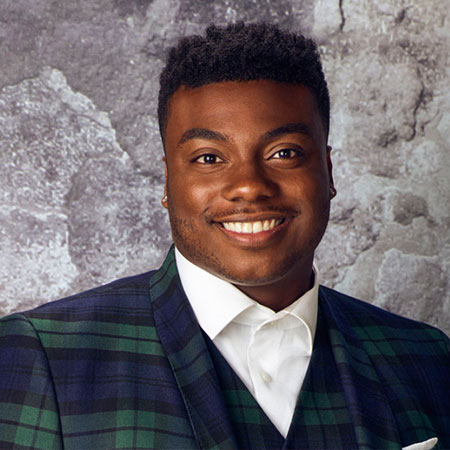 Kirk Jay is an American singer who earned fame after he auditioned for the 15th season of American singing reality show "The Voice." Jay made his way to the final of the show and finished in the third place. In the blind audition, Jay was able to turn all four coaches with his performances and he chose Blake Shelton as his coach.

Kirk jay was born on July 1, 1996, in Bay Minette, Alabama, the United States under the zodiac sign of cancer. Her zodiac sign describes her personality as an emotional, sensitive, sympathetic, and persuasive.

Kirk Jay is American regarding his nationality and belongs to African-American ethnicity. He spent his early life in Bay Minette in poor family background. As a child, Jay faced pretty difficult situations; he used to stay at home with no electricity supply, water, and even less food supply for the family.  From the age of 5, he started playing drums at church and singing in the choir.

Kirk Jay started his singing career with his group, Kirk Jay & Kuntry Funk. His group toured and performed in many cities but they were not famous among the public. In 2014, he met a music manager who brought him to perform for Teddy Gentry, the ba s s player for the band Alabama.

In 2015, he started doing open mikes in several local clubs and coffee houses. He shocked the audience with his country voice because of which, many bar owners started booking him.

On September 24, 2018, he auditioned for the American singing reality show The Voice Season 15. He sang Bless the Broken Road on the blind audition, where all the coaches Adam Levine, Blake Shelton, Kelly Clarkson, and Jennifer Hudson turned their chairs. He chose Blake Shelton as his coach.

During the show, he sang several popular songs including You Look So Good In Love, I'm Already There, Defenseless, and I Swear. He even dedicated his top 8 performance to his dad, who was in the hospital fighting cancer.

On October 8, 2018, he secured his spot in the final four. After he secured the spot in the final and became popular across America. He ended the competition as the second runner-up. His most notable performance on the show was the country song which brought him in limelight.

As of January 2019, Kirk Jay's net worth is estimated to be around $30,000. Growing up in a poor family, he became interested in music from his early childhood. Later he started singing in local clubs and coffee shops and after he entered the singing reality show The Voice, his career turned around. He is bound to get several offers in his upcoming days after he grabbed the 3rd position on the show.

He is just a rising star, and wish he will soon achieve his career as a singer will earn a lot of wealth.

As of January 2019, Kirk Jay is not dating any girl. As of now, he is focused on his singing career so he might not want to involve in any kind of romantic relationship. He does not have any affairs or in a relationship so that he could focus and build his career.