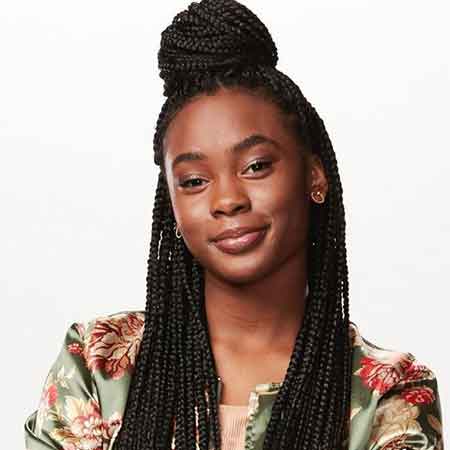 Kennedy Holmes is a young contender in "The Voice U.S." Season 15. She has just stepped into her teenage years but her singing talents make her appear as a veteran singer. She made all four judges turn their chairs in the audition of the singing reality show. She is gaining attention from across the world and her popularity is sure to grow in the upcoming days.

Kennedy Holmes was born on December 7, 2004, in St. Louis, Missouri. Her mother's name is Karen Holmes but the information about her father is still unknown. She was just 13 when she went for The Voice Audition where her parents also appeared to support their daughter. She is the only child of her parents.  She was born under the star sign of Sagittarius which defines her as an extrovert, optimistic and enthusiastic. Kennedy Holmes is American as of their nationality and is of African-American ethnical background.

Holmes is also interested in acting in addition to her singing craze. Holmes has acted in some plays at one of St. Louis' most famous theaters The Muny. She was only 2 years old when started showing her interest in singing; then she sang for her mother. She sang Jennifer Hudson's "I Am Changing" song in her first public performance which is the same song which she sang on The Voice's audition alongside the singer.

Head to @applemusic and give my cover of This is Me from @greatestshowman a listen...or 10! Then go vote all the other ways for #TeamKennedy! Love you!! Link is in bio.

Kennedy Holmes, who gives a powerful performance on the NBC singing reality show has become an inspiration for several youngsters who want to pursue their career in music. Holmes reached the top four of the competition and the final of the competition was held on December 18.

Holmes's has just started to pursue the career of her dream and is becoming a public figure. She is not earning money yet, however, we believe she will earn a significant amount of money pretty soon.

She was one of the most praised singers on the show.  After turning all 4 judges' chair she went on to great fame and popularity. She sang the famous Adele tune 'Turning Tables' and went with coach Jennifer Hudson. Throughout the competition, she sang songs like Battlefield, What About Us, Greatest Love of all and so on.

She reached the Top 8 of the show with ease, however, she struggled to make it to the Top 4 as she was relegated to the Bottom 3. Instead, she secured her place in the top 4 as the fans loved her and she gave a scintillating performance. Judges including Blake Shelton, Adam Levine, and Kelly Clarkson loved her performance and showered her with praise throughout the competition.

Kennedy Holmes rose to prominence after participating in the NBC reality show The Voice. Throughout her journey on the show, she didn't talk much about her family background and her early childhood. But still, she revealed she started singing pretty early. She said her hobbies are dancing and acting.

Even though she is busy with the reality show, she is continuing her education side by side. On upcoming days, she might follow the career paths like previous The Voice finalists.