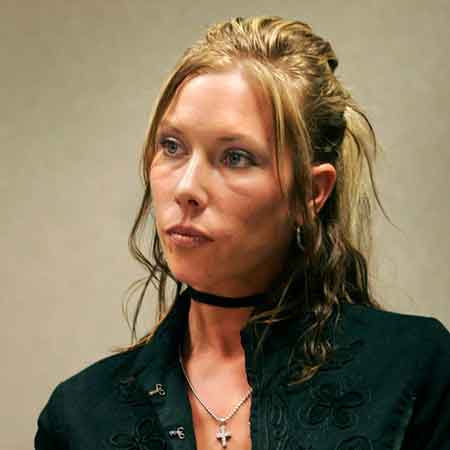 Kimberly Mathers is popularly known as the ex-wife of a rap superstar, Eminem. The duo was teenagers when they first fell in love. The couple married twice, they first tied the knot in 1999 and divorced in 2001. Later, they remarried in January 2006 and divorced only after three months of marriage.

Kim Mathers was born was Kimberly Anne Scott on January 9, 1975, in Warren, Michigan, the United States to Kathleen Sluck. She has a twin sister, Dawn Scott. Her birth sign is Capricorn which defines her personality as confident, responsible, intelligent, realistic who is incredibly practical and resourceful.

Mathers was too young when her parents divorced so she and her twin sister were raised by their mother and stepfather, Casimer Sluck who was very abusive. Due to her stepfather, Mathers and her sister ran from home at the age of 15. She had a tough childhood.

Kim Mathers hasn't enrolled in any profession, she is best recognized as the former wife of rapper and actor, Eminem. He is the best selling artist of the 200s in the USD and had 10 number-one albums on the Billboard 200 throughout his career. As of 2019, the legendary artist won 15 Grammy Awards.

Kim Mathers' Net Worth And House

Professionally, Kim Mathers hasn't enrolled in any job or fraternity, she gained popularity from her marriage with Eminem. She has an estimated net worth of $2 million which believed she get as alimony from her divorce. She owns a house in Macomb Township, Michigan, United States. But the financial detail of the house is not revealed.

Mathers' ex-husband Eminem is one of the most successful rappers in the world of music. The rapper has an impressive sum of the net worth of $210 million as per celebrity net worth, in 2019. The rapper racked up such an impressive amount of net worth from her prolific music career.

In the year 2003, the artist bought his Michigan mansion for $4.75 million. The mansion is located in Rochester Hills, Michigan. In March 2018, the rapper made $13 million from the single "Lose Yourself".

Kim Mathers is possibly single at the moment but previously he married to popular rapper, songwriter, record producer, and actor Eminem. The duo was just teenagers when they first met at a house party, Eminem was 15 and Kim was 13.

Mathers and her sister, Dawn had run away from home because of their abusive stepfather and Eminem took them to his house where his mother heartily welcome both the sisters. In 1989, they began their on-and-off relationship. They welcomed their daughter, Hailie Mathers on December 25, 1995.

The duo married twice, they first exchanged vows in 1999, shortly before Eminem's Up In Smoke Tour and divorced in 2001. Later, they resolved their conflicts and again married in 2006 but filed for divorce in early April, agreeing to the joint custody of their daughter.

Mathers has a child from her brief relationship with an unknown man to whom Eminem adopted. Eminem released a single, Kim in 2000 where he explains about his love hatred feeling for his wife.

In 2001, Mathers was arrested and charged with cocaine possession but was not convicted. She pleaded innocent to the charges but she was sentenced to 30 days in prison after violating her probation.

Mathers attempted suicide in 2015, in a conversation with radio show she revealed, the drunk driving incident on October 2015 was a suicide attempt, she drove the care with the intention of crashing the vehicle for which she was so sorry.

Kim Mathers lost her twin sister, Dawn on January 2016, she was found dead in a home in Macomb County, Michigan because of the drug overdose. Later, Eminem adopted her daughter, Alaina Marie Mathers.

Kim Mathers' Age And Other Facts

Check out the video of Kim Mathers where she talks about Eminem and her relationship with him;