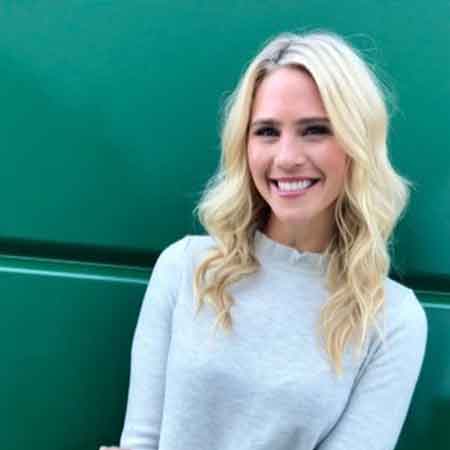 Katie Osborne is a Los Angeles-based sportscaster, who is best known for her a s sociation with Fox Sports, ESPN, NBC Sports, and Spike TV. Since 2017, she is serving as the digital pit reporter and race day host for the IndyCar Championship. Oborne is also widely recognized as the girlfriend of the professional racing driver and TV host, Tanner Foust.

Katie Osborne was born on July 30, 1982, in Indianapolis, Indiana. She is of American nationality and belongs to the white ethnicity.

After completing her schooling, she joined University Low. Then she joined the University of Indiana, Bloomington, and graduated in 2010 with a degree in Sports Communication - Broadcasting. She was a competitive swimmer on a national level.

Katie Osborne started her career as a client service intern for the Indianapolis Motor Speedway. Then she worked for Nike, Chick-fil-A, and WISH-TV Channel 8 for a few years before starting her hosting career.

In 2014, she joined the American regional sports network, Fox Sports San Diego as a sideline reporter, alongside Kelly Crull, Britt McHenry, Laura McKeeman, and others. After working for a year with Fox News, she left the job.

the next year, Osborne became the host of the PowerNationTV, aired on Spike TV, CBS Sports, and NBC Sports which helped her to gain public attention. Since 2017, she has served as the digital pit reporter and race day host for the IndyCar championship.

Additionally, she is a reporter for the trackside reporter for Snocross on CBS Sports, Mec u m Car Auctions on NBC Sports, and the pit reporter for TORC, The Off-Road Championship.

Apart from hosting a TV show, Osborne is also involving with FindJoy Project, a virtual crossroad for companies and individuals to share life lessons and provide positive stories to help others find joy in their lives.

She is also involved in the charitable organization Make-a-wish.

Katie Osborne's Net Worth And Salary

Moreover, she also enrolled in different charities and social organizations to whom she donated a good sum from her salary. Considering her career profile she has a decent sum of net worth but exact worth is unknown but according to some sources it is believed to be around $1 million.

Katie Osborne is in a romantic relationship with her longtime racer boyfriend, Tanner Foust. The couple is dating for a quite long time and shares a healthy relationship. She often shares their cute pictures on her Instagram where she has more than 30.3k+ followers.

It seems that the two are much in love and are sharing a beautiful bond of love with each other. But there is no clue about their wedding plan.

Turns out smelling grapes doesn’t really give much indication of anything. #lessonsinwine #sonomacounty #offday #pinotnoir

Katie is firmly devoted to her family and friends. She enjoys yoga, coffee, tulips from the farmer's market, and finding ways to help others. She also has created and coordinated several Make-A-Wish experiences and worked with several foundations to enrich the community for the better.

The media personality currently resides in Los Angeles, California. She also spends her time in Nashville.

Below we present the video of Katie Osborne: