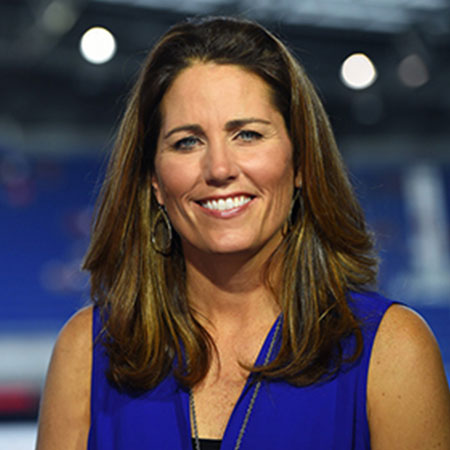 Julie Foudy, born in San Diego, California is a retired professional soccer player who is a two-time Olympic gold medalist. She is currently working as a sports analyst on ESPN where she is famous as a color commentator for women’s soccer telecast. She is also a founder of The Julie Foudy Sports Leadership Academy (JFSLA).

Julie Foudy was born on January 23, 1971, in San Diego, CA under the birth sign of Aquarius. She was born in San Diego, however, was raised in Mission Viejo, Orange County. Julie attended Mission Viejo High School. While she was in high school, she was listed in the First-Team All-America twice. After her graduation from High School, she attended Stanford University.

She began her career as a soccer player when she was in High School. She was honored as the Player of the Year for Southern California for three straight years from 1987 to 1989. She was named the Los Angeles Times' high school player of 1980s.

Later, she started playing with the NSCAA All-American at Stanford University where she took the team to the playoffs all four time. She finished her collegiate career with 52 goals, 32 assists, and 136 points. Later, she joined Sacramento Storm club and won the 1993, 1995 and 1997 California State Amateur Championship. She left the club and joined Tyreso FF in 1994 along with Michelle Akers, Mary Harvey, and Kristine Lilly.

Ahh, great WC Finals memories today. Miss lacing them up, but we can all still make some big off field saves w/ my teammate @ally. Tweet @ally what you’re saving for with #ownthesave and #sweepstakes for a chance to win $500. Rules, always rules: https://t.co/x6cf63KPmM. #ad pic.twitter.com/faMalbL4jE

Later in 2004, she joined fellow soccer players Mia Hamm, Joy Fawcett and Brandi Chastain in a 10 game ‘Farewell Tour’ which marked as the end of what the media labeled the ‘Golden era’ of US women’s soccer.

After Her Retirement From Soccer, What Did She Do?

She began serving as an in-studio analyst for ABC, ESPN and ESPN2’s coverage of the 2006 FIFA World Cup and UEFA Euro 2008. Julie also co-anchored ABC and ESPN telecast of the 2007 FIFA Women’s World Cup and the Major League Soccer in 2007.

Julie appeared as a pundit for the ESPN coverage of the UEFA Euro 2008 championship final along with Andy Gray and Tommy Smyth. She has been working on ESPN’s Primary broadcast team along with Lan Darke for women’s soccer telecast since 2010.

Besides television career, she along with her husband founded The Julie Foudy Sports Leadership Academy (JFSLA) in 2006. It is an organization that focused on sports and leadership for girls.

Julie has not revealed about her net worth to the media. As a former soccer player and a journalist, she might have earned millions of dollars.

Julie Foudy is aged 48 as of 2019. She is a married woman. She got married to Ian Sawyer, an established soccer coach, in 1995. The happily married couple was blessed with their first baby girl Isabel Ann on January 1, 2007. Later, they gave birth to their second boy baby, Declan in December 2008.

CAPTION: Julie Foudy along with her husband Ian Sawyer, and their children Declan and Isabel Ann SOURCE: ESPN

She is currently living a happy married life with her husband and two children. She is active on social media and also a popular face on Twitter. As of February 2019, she has about 11.6k followers on Instagram and 207k followers on her Twitter.

In the Video shown below, Retired Midfielder Julie Fody talks about her old days when she was still playing soccer with her team.