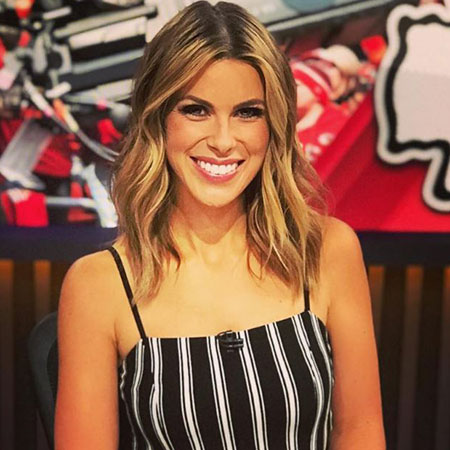 Jenny Taft is a former US athlete, former national soccer player and a host and an anchor. Taft was also a s sociated with The U.S Women's National Team (USWNT) during the FIFA Women's World Cup. She even won the NSLA player of the year for her performance in Lacrosse in 2005.

Jenny Taft was born on September 5, 1987, in Minnesota, the USA under the zodiac sign of Virgo. She holds an American Nationality and she belongs to the White American ethnicity. Her father's name is John Taft, who was a professional hockey player and a captain of the US Hockey Team in 1976.

CAPTION: Jenny Taft and her family SOURCE: Married and Divorce

Her father even won two NCAA titles. Her mother's name is Mary Taft. She grew up with her brother, Charlie Taft, a senior member of the hockey team at Colorado College in Colorado Spring.

Jenny Taft was good at hockey, lacrosse, and tennis when she was attending her high school. She won NSLA player of the year for her performance in Lacrosse. She was induced to 2005 MSHSL/NSLA AII-Star Team and 2006 MSHSL AII-State Team. She played six matches with her high school soccer team and scored one goal and a s sisted for one goal.

Jenny Taft started working in IDPR in New York City for Public Relations after her graduation. She worked there for a while and she moved back to her hometown and began working as a FOX Sports Girl for the FOX Channel where she covered various sports events.

She left FOX News Channel and started working for its sister network FOX Sport 1 in a variety of roles. She even worked as a sideline reporter for the network's coverage of college football as well as a field reporter for sometimes.

Taft even served as a fill-in host on the studio program AMERICA'S PREGAME and on FOX Sports 1 as an anchor.

During her career as a reporter and anchor, her biggest accomplishment was when she covered the U.S. Women's National Team during The Confederation of North, Central American, Caribbean Association Football and Women's Championship.

Jenny Taft net worth is estimated to be of $2 million. She has collected a decent amount of money from her career as a host and journalist for different stations. She earned a handsome amount of money from her a s sociation with the Fox News. According to the sources, an average annual salary of a Fox News reporter is $45,676-$85,914 which ranges from $41,658 to $108,310 a year.

Meanwhile, her husband Matt Gilroy has a net worth of $2 million as of 2019. Gilroy is a professional American professional ice hockey player who plays for the SC Rapperswil-Jona Lakers.

Jenny Taft is a gorgeous and beautiful journalist who has been married to her longtime boyfriend Matt Gilroy. According to the source, the couple tied the knot in June 2016 just after dating several months.

Their marriage ceremony was held privately in Santa Barbara, California where they exchanged their vows in front of their close friends and relatives. The happily married couple didn’t post their marriage photo on their social media but her friend congratulated her by posting their photo on his social media on June 6, 2016.

This cute couple is living their life happily even though they are rarely seen together because of their hefty work schedule. They have been married for over two years, however, they are still keeping their relationship life behind the media radar.

The one day it rains in San Diego.

In the video shown below, Jenny Taft can be seen along with Mike Hill during a pregame show for Fox Sports 1.