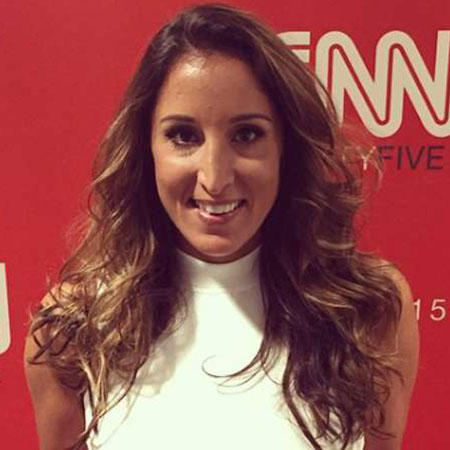 Yasmin Vossoughian, the famous American journalist currently works for the CNBC network. She came into the spotlight after making a documentary in Tehran, Iran which she directed and edited herself. She received Cine Golden Eagle Awards for her amazing documentary work. She is one of the famous journalists in the USA also popular for her interviews with several Hollywood stars and political heroes.

Yasmin is a Libra that describes her personality to be stable, romantic, dependable, spiritual, and wise. She is an American by her nationality and as far as her ethnicity is concerned, Yasmin is an Iranian-American.

In 1996, Vossoughian graduated from the Northfield Mount Herman School in History and Economics. She minored in theatre from the Occidental College in Los Angeles, California in 2000. Furthermore, she also studied broadcast journalism at the New School in New York City.

At the age of 16, Yasmin interned on Capitol Hill for Benjamin Gilman; a former Congressman. At that time, she was the youngest intern to work with Benjamin Gilman.

After her graduation, Vossoughian started serving the E! Entertainment Television as a production assistant. She further went to Style Network as a producer. She first received the job offer in a German-based internet TV at DTV. There she received the opportunities to cover some major events including New York City Mayoral Race and the 9/11 terrorist attacks.

Likewise, she also received the chance to interview many Hollywood celebrities along with Tom Cruise, Robin Williams, Salma Hayek, and Sasan Sarandon. Along with that, she also has interviewed famous leaders of the world including Newt Gingrich in Washington DC and Madeleine Albright in Qatar.

Later, Vossoughian worked in Style Network for some months before she started working as a correspondent for the Current TV. In her first assignment, she went all the way to Tehran and made a documentary on the underground youth and culture. She also edited, shot, and reported the documentary by herself.

Her work in Tehran later earned her an award the Cine Golden Eagle Awards in 2006. She also served as a host and producer at AOL; there she hosted live news and entertainment programs. She worked as the producer and the host of some news and entertainment programs on HLN for three years since May 2014. In 2017, she moved to MSNBC and has been working in the network since then.

Earnings, Salary, And Net Worth

Yasmin Vossoughian's career in journalism earned her great fame as well as worth. She has remained tight-lipped about her net worth and earnings, however, as per some sources, her estimated net worth is around $1 million which sounds pretty convincing looking at her career growth.

As per the Payscale, the average salary of an American TV journalist ranges from $21,090 to $81,940 per year. So, it is obvious that Yasmin receives a good sum of salary and bonus for her work.

Yasmin Vossoughian is a married woman. She is happily married to her longtime boyfriend Whittaker Lindsay Clifford since June 2016. Her husband Clifford is a businessman who runs his family business Clifford Associates Inc.

As per the reports, Yasmin was pregnant with her first child with her husband at their wedding and a little baby bump was clearly visible from her wedding gown.

The happy couple welcomed their first baby son on 15th October 2016 and they named him Azur Vossoughian Clifford. On 13th May 2018, Yasmin posted a picture of her with her son stating the status of expecting BABY No. 2. On August 8, 2018, she gave birth to her second child, Noor Ahad Clifford.

1. What nationality is Yasmin?

Yasmin Vossoughian was born in New York, the USA on 3rd October 1978 to parents Dr. Ahad Vossoughian and Shamsi Vossoughian. She is American and her ethnicity is Iranian.

2. Who is Yasmin Vossoughian's husband?

She has been married to Whittaker Lindsay Clifford since June 2016. Her husband is a businessman who runs his family business Clifford Associates Inc.

Her estimated net worth is around $1 million which sounds pretty convincing looking at her career growth. Her salary ranges between $21,090 to $81,940 per year.