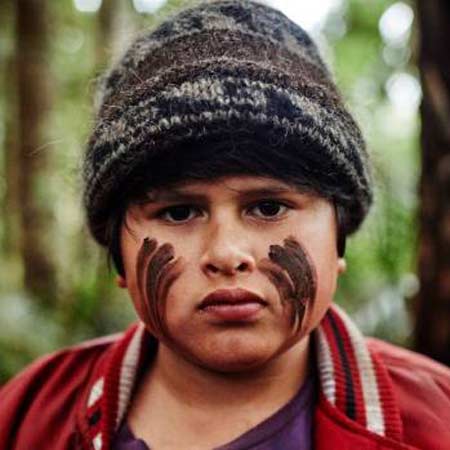 Two times New Zealand Film Award winner, rising American actor, Julian Dennison is well known for his role as Kevin in the 2015 movie, Paper Planes and as Ricky Baker in Hunt for the Wilder People. Dennison made his movie debut in 2013 from the film, Shopping. As of 2018, he is working on the superhero film, Deadpool 2.

Julian Dennison was born on 26th October 2002 in Lower Hutt, New Zealand to Mabelle under the birth sign Scorpio. Dennison holds New Zealander nationality and belongs to European descent. Dennison has a twin brother, Christian Dennison and two other siblings.

Julian Dennison made his big screen debut as Solomon in the movie, Shopping.  He even won New Zealand Film Awards for his performance in the film. Two years later, he worked in 3D children’s drama film, Paper Planes with Sam Worthington, Ed Oxenbould, Deborah Mailman and David Wenham.

In 2016, he again won New Zealand Film Awards for his performance in the movie, Hunt for the Wilderpeople. The same year, he made his TV debut from Funny Girls.

As of 2018, Dennison is working as Russell in the superhero film, Deadpool 2 with Ryan Reynolds, Josh Brolin, Zazie Beetz and Brianna Hildebrand. His dream of becoming a superhero came true through the movie. He stated,

‘’I've always wanted to be a superhero and I get powers in this film. It was just amazing as a 15-year-old kid being a part of this film. And I'm part of the whole Deadpool universe.’’

The actor will be working in a number of other projects in the coming future.

Julian Dennison has an estimated six-figure net worth, but the exact sum is not public. Dennison is making money from his acting career. His 2016’s movie, Hunt for the Wilder People collected $23.2 million at the box office which was made with the budget of $2.5 million. IMDb rated the movie 7.9 stars out of 10. The movie starred Taika Waititi, Sam Neil, Rhys Darby and Rachel House.

Julian Dennison is still a teenager and yet be involved in a serious love relationship. At present, Dennison is focused on building his career. With the limited information he has shared about his love life, it can be assumed that he is possibly single.

Despite earning huge fan following, he lives a normal life and still hangs out with his friends and family. He stated,

‘’ I don’t want to get bigheaded, and my family keeps me grounded. I still have a normal life and I would like to keep a normal life.’’

Besides, his hobbies are traveling.

Here is the video where Sam Neill and Julian Dennison talk about their role in Hunt for the Wilder People: