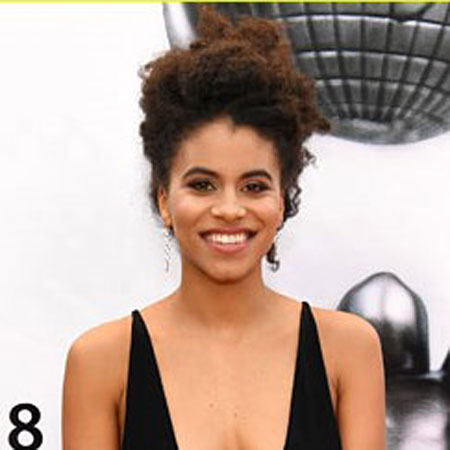 German-born American actress, Zazie Beetz who made headlines after being appointed as one of the cast in the Deadpool sequel. She is also known for her critically acclaimed character of Venessa on TV series, Atlanta. She is currently filming for Deadpool 2 as Neena Thurman, which will release on June 1, 2018.

The Venessa star, Zazie Beetz was born in 1991, in Berlin, Germany. She belongs to American, Germany nationality as far as her ethnicity is concerned, Zazie is of mixed ethnical background as her father is German and Mother is African-American.

She was born to African-American social worker mother and German cabinetmaker father. As a child, she also performed in several community theaters and local stages. After that, she discovered her love for acting when she was a school girl.

Though Beetz was born in Germany, she grew up in uptown Manhattan, New York City. At the time, she used to speak both German and English with her family at home. She also attended many schools in order to receive theatre training such as Muscota New School, the Harlem School of the Arts, and LaGuardia Arts High Scholl.

After that, she enrolled at the Skidmore College and received a bachelor's degree in the French language.

Beetz started her acting career in the year 2013 by appearing in The Crocotta as The Crocotta. After a couple years, she made her appearance in two films, Applesauce, and Double Bind.

In the year 2016, Beetz has appeared on a number of TV series and movies, Easy, MBFF: Man's Best Friend Forever, Finding Her, and Wolves. She also appeared in Geostrom in 2017.

Currently, she is filming of Deadpool and playing the role of Neena Thurman alongside Josh Brolin, Brianna Hildebrand, T.J Miller, and Morena Baccarin so far.

Zazie is yet to get married. Though she has never opened up about her dating and past relationships, we have revealed her dating The Revival actor David Rysdahl through her Instagram.

In August 2016, Zazie revealed her picture with David on her Instagram which made many of her fans confused. she captioned it as:

Zazie hasn’t posted many pictures of them, but David often posts their pictures on his Instagram. Recently, he posted an image with Zazie with caption:

After looking out their interactions on social media, it seems that they are in a serious relationship, but the couple hasn’t confirmed their relationship yet.

German-born American actress, Zazie Beetz has earned a good amount of net worth from her acting career that is estimated to be $1 million. She stands at the height of 5 feet 6 inches. She has a very attractive figure with her body measurement of 32-23-32 inch.