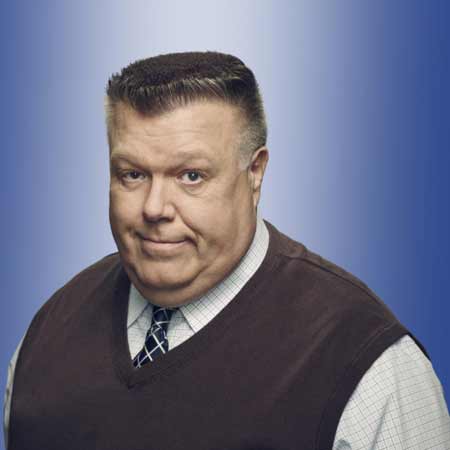 Born and raised in Rockford, Joel McKinnon Miller is an American film and television actor. The actor's biggest role came in 2006 after he played Don Embry from 2006-11in the hit television series Big Love. He is also notable for his work in Brooklyn Nine-Nine, The Family Man, and Forever Young. He was also nominated for Screen Actors Guild Award for his outstanding performance.

Joel McKinnon Miller was born in 1951, in  Rockford, Minnesota, United States. He grew up in his hometown Rockford along with his parents. During his teenage years, he took opera singing cla s ses. He holds American nationality and regarding his ethnicity, he is White American.

Miller later joined the University of Minnesota Duluth to study theatre and dropped out in 1980. But he came back to his alma mater to complete his course in 2007.

Miller's other early work includes The Home Court (1996), Prison of Secrets (1997), The Truman Show (1998), The Thirteen Year (1999), and The Family Man (2000). He gained further praise and recognition following his main role Lyle Nubbin in three episodes of Las Vegas.  He has been playing the role Norman Scully in the American police television sitcom Brooklyn Nine-Nine since 2013. He shared the screen alongside Andy Samberg, Stephanie Beatriz, Terry Crews.

Joel McKinnon's Net Worth And Major Source Of Income

Joel McKinnon has earned a decent amount of money from his career as a film and TV actor. According to various reliable online sources, the actor's net worth is around $1 million, but the exact figure is still a mystery.

He has been a part of a number of commercially successful movies and some of them are listed below.

Joel McKinnon is married to his girlfriend Tamara McKinnon for a long time. The couple has no children yet. The actor currently resides in Los Angeles with his wife Tamara.