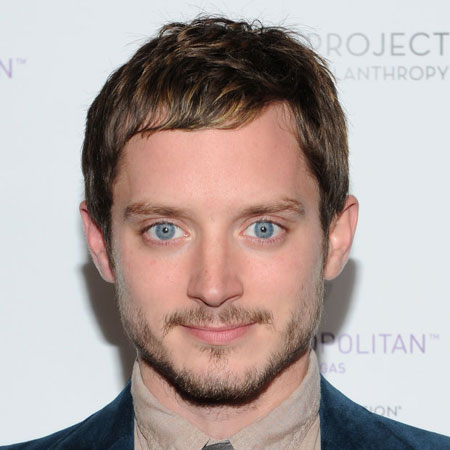 American actor, Elijah Jordan Wood is best known for his portrayal as Frodo Baggins in Peter Jackson's epic film trilogy The Lord of the Rings. He is a voice actor, DJ, and producer.

Elijah Jordan Wood was born on January 28, 1981, in Cedar Rapids, Iowa where he spent most of his childhood. He is the second of three children of Warren and Debra (Krause) Wood who were delicatessen operators.

Wood comes from a mixture of the ethnicity of English, Polish, German, Austrian, and Danish ancestry. Wood was raised as a Roman Catholic by his parents. He has two siblings named Zachariah and Hannah.

Wood began modeling in his hometown at the tender age of seven and took piano lessons. He made his appearances in the elementary school in The Sound of Music, followed by the title character in The Wonderful Wizard of Oz. While in elementary school, Wood also served as choir boy during the production of See How They Run.

He wanted desperately to work in Hollywood and thus got a minor part in Back to the Future Part II. Wood is known primarily as a critically acclaimed child actor. By the age of 9, Wood had managed to garner nominations for several Young Artist Awards. He went on to starred in the films Radio Flyer in 1992, The Good Son in 1993, North in 1994, and Flipper in 1996.

He began getting his teenage roles in the films The Ice Storm in 1997, Deep Impact and The Faculty. He got the role of Frodo Baggins in Peter Jackson's epic film trilogy The Lord of the Rings from 2001 to 2003.

He has further been seen on films such as Eternal Sunshine of the Spotless Mind in 2004, Sin City, Green Street, Everything Is Illuminated. He has a voice as the main character in the 2006 musical film, Happy Feet and Happy feet two in 2011.

In 2012, Wood voiced as the character Beck in the animated series Tron: Uprising, Sigma in the tenth season of the Rooster Teeth series, Red vs. Blue, and Wirt in the Cartoon Network miniseries Over the Garden Wall.

Elijah Wood's Net Worth And Salary

Elijah Wood's net worth is $30 million at present. He earns an annual salary from his successful acting career.

Wood began dating actress Bijou Philips in 1999. Philips is known for dating Di Caprio and for her role in Black and White. The couple separated soon enough. Elijah then dated actress Franka Potente in 2003. They separated a year later.

In 2005 Wood met actress Pamela Racini on the sets of Everything is Illuminated and they began dating. However, they separated in 2010 because Wood allegedly had commitment issues. Wood has not married till date, does not have a wife and is currently single.

Wood is currently 34 years old but looks very younger than that. He stands tall at the height of 5 feet 6 inches. He has a well-structured body. There are rumors that Wood is gay.

Wood has his s own record label named Simian Records that he opened in 2005. Wood recently finished playing the role of Ryan Newman in FX's cult dark comedy, Wilfred. His green eyes accompanying his innocent face attracts a lot of ladies.