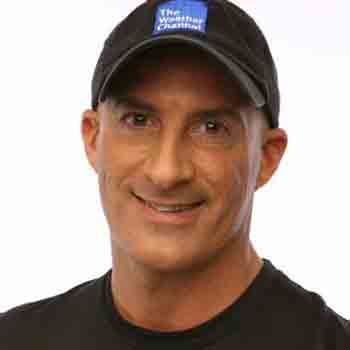 Jim Cantore, an American meteorologist and well-known personality in the field of journalism, works at The Weather Channel (TWC). He is widely recognized as an on-air personality working for the American basic cable and satellite television channel, TWC. He currently hosts American Morning Headquarters (AMHQ) alongside Jen Carfagno and Stephanie Abrams.

Jim Cantore was born on February 16, 1964, in Beacon Falls, Connecticut, U.S and grew up in White River Junction, Vermont. His surname is pronounced as Can-Tour-E. He is an American by nationality and belongs to the White-American ethnicity. He was born under the zodiac sign of Aquarius which defines his personality to be friendly, intelligent, independent, loyal, and unpredictable.

Cantore is a well-known figure in the American television industry. Currently working for TWC, he does weather forecasts on the screen giving the viewers a better view of the weather.

Jim Cantore's father's name is James Cantore, however, his mother's name is still a mystery. He was a lucky kid to be born in such a supportive family which supported him in each of his decisions. He also has a sibling Vinnie Cantore. He spent his early days with his brother in White River Junction which is in Vermont.

As he was interested in the journalism sector from his childhood, Cantore attended Lyndon State College and completed his graduation in the year 1986. The same year, he got his first job as an intern in the Weather Channel as the weather forecaster.

In his college days, everyone used to call him Rocky because of his looks. He rose up as a Hurricane Hunter because of his breakthrough reporting of natural disasters like hurricanes and tornados happening in the United States.

The on-camera Metrologist, Cantore is one of the top weather reporters of America covering such devastating weather casualties. Because of his coverage of five hurricanes like Andrews he rose to fame. He has also reported disastrous weather events like Gustav, Isabel, Floyd, Rita, Mitch, Bonnie, Sandy, and Irene.

Talking about some of the achievements, Cantore has got a chance in reporting the Winter X Games and PGA tournaments. He is a part of the most promising launch of Space Shuttle Discovery. He has been awarded the prestigious NOAA in 2002.

In the AMS Television Seal of Approval, his name has also been bestowed. He is a member of the National Weather Association. Because of his continuous support and contribution in the field of landscapes, weather reporting he also got the membership in American Meteorological Society membership.

Moving on to her contribution, Cantore has been engaged in different kinds of humanitarian programs helping people all around the world. He has contributed to the Make a Wish Foundation, Michael J Fox Foundation by giving away his beneficiaries.

Cantore is mainly involved in giving his income so that research and cure of Parkinson’s disease could be carried out effectively. The disease is possessed by his wife and children. Because of his continuous effort and support he has been included as a member of the United States Red Cross.

In early 2014 while Jim was doing live reporting from at the College of Charleston, he was charged by the student Colin Marcelli. After noticing he kneed Marcelli in his groin area and runoff. This record received more than 2 million views on the YouTube channel.

Jim Cantore's Net Worth and Salary

Cantore was applauded for his brilliant work and campaigns throughout the country at the time of the Katrina Hurricane in 2011. The famous Weather Channel meteorologist Jim Cantore earns a handsome salary. According to Paysa.com, an average The Weather  Channel meteorologist makes an average of $60,177 annually so, we can predict Cantore also earns the salary in the same range.

According to Celebritynetworth.com, the Connecticut-based meteorologist's current net worth is estimated to be around $3.5 million. He is also regarded as one of the successful and highest-grossing weather forecasters in America.

The 5 feet 8 inches tall, Jim Cantore currently resides in Beacon, Connecticut. His current marital status is unmarried but he was married previously and was in a long-term marital relationship with his wife Tamra Cantor.

Cantore was married to Tamra Cantore from 1990-2007. They first met in his first job place at TWC and later on develop their relationship and got married. The couple is blessed with two children. Their daughter Christina Cantore was born in 1993. After two years of their marriage, Tamra gave birth to her second child Ben Cantore in 1995.

His wife Tamra was diagnosed with Parkinson’s Disease and both children have Fragile X syndrome. A few years after her diagnosis of the Parkinson's disease, the couple's happy married life started deteriorating and soon they reached the decision to quit their relationship.

They separated in 2007 and their divorce was finalized in 2009. Since the time of his divorce, Jim has been rumored about his sexual orientation, people speculate Jim to be gay, however, the meteorologist has not spoken about his sexuality yet.