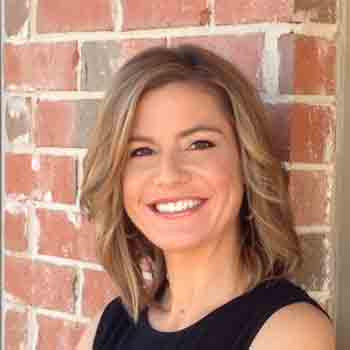 Jen Carfagno is one of the prominent faces in the field of media. American meteorologist Carfagno is the weather forecaster of The Weather Channel (TWC). She currently hosts America’s Morning Head Quarter (AMHQ).

From 2013-16, Carfagno hosted Weather Center Live on Thursday-Friday early mornings and weekend mornings. Jen Carfagno has been working for the network since 1997. Carfagno has been married to her boyfriend Neil for a long time and the two are blessed with two children.

Jen Carfagno was born on July 19, 1976, in Pennsylvania, United States. Jen was raised in her hometown Collegeville, Pennsylvania along with her family. She completed her high school education at the Perkiomen Valley High School in the year 1994.

During her childhood, she wanted to become a pilot. Later, she became interested in weather and its intricacies and she decided to take a dive into it. She revealed that one more thing that drove her into studying the weather was curiosity.

In her high school, Carfagno was a lifeguard in the school’s swimming pool. So as to measure the dew point of the swimming pool, she was given a psychrometer, which also measures the weather conditions. Her simple practice at school also helped her to pursue her dream as a forecaster.

Carfagno then enrolled at Penn State University and graduated with a BA in meteorology in 1998. She interned at TWC in the final year of her graduation.

Jen Carfagno kick-started her journalism career in The Weather Channel as an intern while she was in her final year at Penn State University. Her internship helped her to grab the experience required to be exposed to the weather forecasting area.

As an intern, Carfagno learned to face the camera and boost her confidence while appearing on screen. Immediately, after graduation, she became a full-time staff of The Weather Channel in 1998.

Carfagno worked for the network as an on-air and off-air reporter for several years. In November 2013, she started hosting a new show ‘Weather All the Time’ graphics of TWC at 4:00 am on Weather Center Live alongside Alex Wallace- they stayed on the air until 5.30 am.

Jen enjoys speaking to students about her passion - science. You can also find her running, relaxing at the beach, or working in the yard. Her favorite weather measurement is dewpoints and is often referred to as the "Dewpoint Diva."

From 2013-2016, this team presented Weather Center Live on Thursday-Friday early mornings and Weekend mornings. In November 2015, she started hosting America’s Morning Head Quarter with Stephanie Abrams and Jim Cantore on the weekdays from 6-9 AM.

Since then, she has been hosting the show. Carfagno hosts America’s Morning Head Quarter (AMHQ) alongside Stephanie Abrams and Jim Cantore.

Jen Carfagno’s estimated net worth is $1.5 million, according to some sources. However, her colleagues, Stephanie Abrams have $7 million and Jim Cantore has $3.5 million net worth.

According to a source, TWC paid $180K annual average salary to its meteorologist. Hence, she is one of the most experienced meteorologists in the TWC, her estimated salary could be in the above figure.

Carfagno has also been involved in several charitable works and movements initiated by TWC and other organizations. In 2017, she sold her 10 Jackets for $1500 each to support a local charity in her hometown.

Jen Carfagno is a married woman. She tied the knots with Neil in the mid-2000s. They have been happily married ever since their marriage. The couple dated several years before the two exchanged vows.

Carfagno has two daughters Kelly Carfagno and Natalie Carfagno with her husband Neil. Carfagno frequently shares her husband and children's pictures via her Instagram.

Carfagno's family currently resides in Atlanta, Georgia. She is happily living with her husband and there is no dispute in their personal life, there is no speculation of this couple being divorced.

According to some sources, her husband is a sports analyst, but he has not revealed his profession as of 2018. He is known for being the husband of the meteorologist. He has been a great supporter of her for a long time. The duo spends their free time with their adorable kids.

Carfagno is a beautiful and diligent journalist who is very friendly to a camera and a confident one. There are many of her fans who are eager to know about her.

Carfagno has a very stunning personality and dazzling smile. She is also quite active on social media, especially on Instagram where she often posts her vacationing pictures along with her two children and spouse.

Fascinated by the clouds

Carfagno was fascinated by the clouds and the weather situations since her childhood. She wanted to be a pilot but later she had the passion to be a weather forecaster and following her dream she has proved herself as one of the most talented and attractive weather forecasters in the industry.

Jen's Twitter page has also a mega fan following with over 58.2K followers as of Dec 2018. She has also a short photo and video sharing social media platform Instagram with thousands of followers.

Carfagno stands at a height of 5 feet and 5 inches and has a body weight of 50 kg. Her body measurement is 36-27-36 inches. She has brown eyes with beautiful blonde hair.  Her body shape is slim.