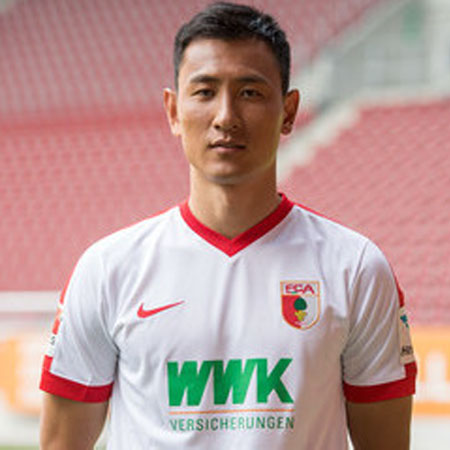 A South Korean Footballer, Ji Dong-Won, plays from the Current Team of South Korea National Team as a Forward and from the German Club called F.C Augsburg as a Midfielder wearing the T-shirt No.24. He was born in 1991 May 28 at Jeju City, South Korea. He is 23 years old and owns the Height of 187 cm and has the body weight of 78 kg. He was born and brought up in Korea. His father is a retired volleyball player. There is no information available on his personal matters which include his relationship status or even Salary. He has kept low profile. He started his professional career in the year 2007.His current market value is 2 million Euros and has the agent called Apertura GmbH.

Ji Dong-Won was an athlete as a long distance runner at the local elementary school. He was 10 years old, when he was approached by the football coach from an elementary school suggesting him to join football. His father sent him to the City of Jeju Island from where Ji Dong Won started playing football. He played for Hwabuk Elementary School and Ohyun Middle School. Later was scouted in the under-18 team of Chunnam Dragons in the year 2007 from where he started his youth career. After the impressive season at the youth side of the team, he was promoted to the senior team of Chunnam Dragons in the year 2010. He spent a season at Chunnam Drahons appearing in 33 matches bagging 10 goals from the team.

Ji Dong-won plays from the main position of centre forward. He plays from the secondary position of secondary striker and left wing. He is a very talented player. He is young, energetic and enthusiastic player. He has adequate strength and stamina keeping pace and durability in the game.  He has strong right foot. He has excellent heading accuracy. He is good at dribbling. He has good control on the ball. He is good at long shots. He needs to improve on his marking and tackling skills. He has fineness in giving shots and loyal to the club.