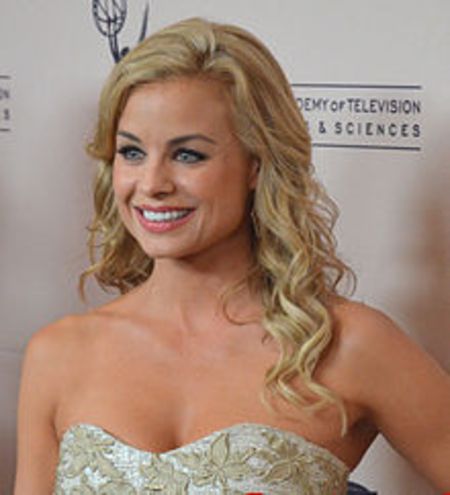 Jessica Collins is a famous American actress who is renowned for appearing in the ABC soap opera Loving as Dinah Lee Mayberry. She is also known for her portrayal in the series The Young and The Restless. Regarding her personal life, she is married twice.

Jessica Collins was born on April 1, 1971, in Schenectady, New York under the birth sign Aries. Her birth name is Jessica Lynn Capogna. She is of American nationality and belongs to the white ethnical society.

Wishing you all a very happy #StarWarsDay

Regarding educational background, she completed her school level from Amsterdam High School. After her high school, she joined Royal National Theatre Studio located in London and later on, joined Howard Fine Acting Studio in Los Angeles.

Jessica Collins started her acting career with her appearance in ABC daytime soap opera Loving in 1991 alongside Luke Perry, Noelle Beck, and Bryan Cranston. Following this, she has appeared in the Two and a Half Men, NCIS, CSI: Crime Scene Investigation,  Nip/Tuck, It's Always Sunny in Philadelphia, and many others.

In 1996, she made her big-screen debut with her work in the movie Leprechaun 4: In Space. After that, she appeared in the film such as Best of the Best: Without Warning, Beautiful, Ritual, Live!, Dirty Love, Open House, Catch Me If You Can, and others.

She has also made her guest apperance in the primetime shows such as Dawson's Creek, Star Trek: Voyager, Beverly Hills 90210, and Lois & Clark: The New Adventures of Superman.

Currently, she is busy working on her upcoming Netflix series, Dolly Parton's Heartstrings.

The actress as well as the former beauty pageant winner, Jessica Collins must have a net worth in six-digit number; however, the actual figure is yet to be found out. An average salary of an actress is around $49,986, so she also might be earning her salary in the same range.

The 48 years old, Jessica Collins has married twice. Currently, she is married to writer and producer Michael Coone. The couple shared the wedding vows on May 4, 2016. Together the couple welcomed a daughter in January 2016. 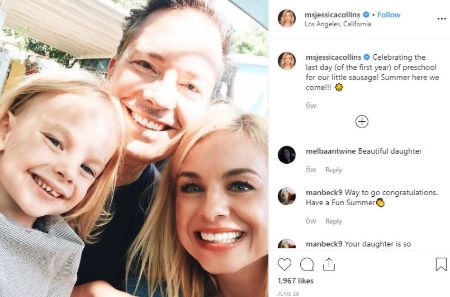 CAPTION: Jessica Collins with her husband and daughter SOURCE: Instagram

Previously, she was married to her co-star from Loving, Robert Tyler. The former couple walked down the aisle on November 11, 1996. However, their relationship didn't last forever for more than six years as they divorced on February 15, 2002. They stated irreconcilable differences as the reason behind their separation.