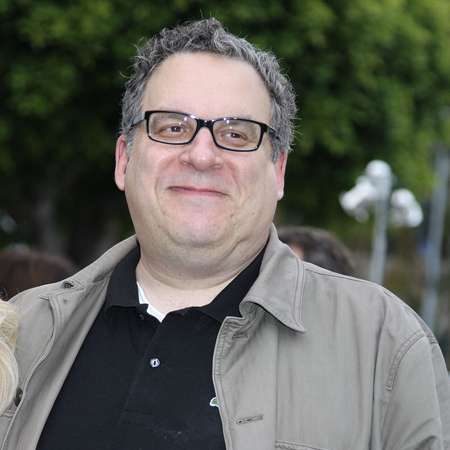 Ameican comedian, and actor, Jeff Garlin started his career as a stand-up comedian. Garlin is popularly known for his role in HBO's show, Curb Your Enthusiasm, Arrested Development, and The Goldbergs. Till the date, he worked in several movies and TV show from where he collected teh huge fan following.

Regarding his personal life, Garlin is married to Marla Beth Cahan with whom he shares two children and both of them are boys.

Jeff Garlin was born as Jeffrey Todd Garlin on June 5, 1962, in Chicago, Illinois to Gene Garlin and Carole Garlin. Garlin's birth sign is Gemini. He is American as per nationality and as far as his ethnicity is concerned, he is White.

Garlin spent most of his childhood days in Morton Grove, Illinois. His father worked in their family plumbing supply business called Bilko while his mother was active in Community Theater. Jeff has a younger brother named Michael Garlin. His parents raised him with his brother in a Jewish family.

Regarding his academics, he attended a Hebrew school. Garlin then went on to graduate from Nova High School based in Davie, Florida in 1980. After that, he went on to attend Broward Community College. Later on, Jeff enrolled at the University of Miami to study film but eventually dropped out so that to pursue a career in stand-up comedy.

From the very early age of eight, he wanted to be a comedian after he saw Jimmy Durante performing in Chicago. Moreover, when he was in grade six, his father sold his business and relocated to South Florida.

After Jeff Garlin dropped out from the college, he began performing as a stand-up comedian. He then started performing with teh comedy troupe The Secon City and later worked in the box office along with Stephen Colbert.

Moreover, he continued to do standup comedian in several stage shows.

Jeff Garlin made his film debut in 1983 in Spring Break. Since then he has been seen in movies like, Hero, RoboCop 3, Little Big League, Larry David: Curb Your Enthusiasm as character Jeff Greene, WALL-E as Captain B. McCrea, Toy Story 3 as Buttercup, and Hawaiian Vacation as Buttercup among others.

Particularly, he is noted for his roles in TV series like The Goldbergs, Curb Your Enthusiasm, Arrested Development and more.

According to Celebrity Net Worth and The Richest, Jeff Garlin has an estimated net worth of $5 million. Garlin earns an impressive amount from his work in movies and TV show.

Furthermore, he worked on several movies that made an amazing box office collection. Here is the list of his hit movies:

Garlin owns a house in Los Angeles, California. With such earning, he is maintaining his lavish lifestyle.

Jeff Garlin does not have a long dating history. He is very much focused on his work at. Garlin is reluctant in speaking about his personal life in front of the public. Garlin has never spoken so much about his past relations and affair.

Furthermore, Garlin is a married man who tied teh knot to his girlfriend turned wife, Marla Beth Garlin in 1994. Marla and Jeff have stayed loyal to each other for more than a decade. Till date, they have not had any rumors about divorce, separation or extra-marital affairs.

Besides, he is a practitioner of transcendental meditation. As per him, it helped him with the symptoms of ADHD ( Attention deficit hyperactivity disorder predominantly inattentive). In the late 20a, he had a surgery to correct Wolff-Parkinson-White syndrome, a heart disease. Moreover, he also has type II diabetes.

In 2013, Garlin was sued over parking lot incident which got him to arrest.

Jeff Garlin stands at the height of 6 feet 1 inches but his weight is unknown to the media. He has a well-defined face and a hefty masculine body which grabs the attention of many of the viewers which especially, females. He has often spoken about weight loss. Garlin still has the charm and skills to make his audience drool and melt at his performance. As of 2018, his age is 56.

Check out the interview with Jeff Garlin: