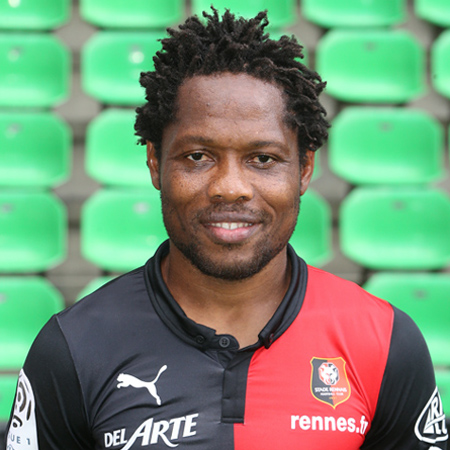 Jean Makoun is a Cameroonian national team footballer wearing squad number 11, who also plays for Stade Rennais F.C, Ligue 1 (France) in squad number 15 as a central defensive mid-fielder (Mild-Fielder). Jean Makaoun has played 55 matches for Cameroon bagging 5 goals from 2003. His Nationality is Cameroon, birthplace, Yaounde, Cameroon. His Date of Birth DOB is 1983 May 29. He has the height of 1.73m and weight 65 kg. The statistics of 2012 states that this 30-year-old right foot footballer has the market value of 3,000,000 Euro and salary to be 1.2 million Euro. His agent is Daniel Neuber. As of 2018, though his current market is not available, his highest market value was £14.40m in 2009.

Jean Makaoun started his career in 2001. Initially, he joined the native club of Cameroon at Cotonsport Garoua. He was then the part of team’s youth set-up. Following this, he spent his time at other Cameroonian clubs as well before joining French Ligue 1 club Lille. From Lille, he maintained a firm fixture playing in more than 150 matches for the team in the league and UEFA Champions League. His skills and performances had attracted the interest of different clubs like Arsenal, Tottenham Hotspur, Serie A club Juventus, AS Monaco, Marseille, and Lyon.

In 2008, Jean Makaoun joined seven times French Champions Olympique Lyonnais (Lyon) on a four-year contract. He made 76 appearances from Lyon bagging 8 goals in his name. His experience in Lyon was tough. He had to go through many criticisms from Lyon’s fan. On the third season at Lyon, he suffered a thigh injury. In the meantime, he was experiencing and enduring the ups and downs. Thus, he decided to leave Lyon for good.

In early 2011, Makaon joined Aston Villa. He made 9 appearances from Aston Villa with no goal records. He was given a red card while playing for a tackle on Blackpool’s DJ Campbell. He was suspended for three matches then which had given him a big shock. Makaton left Aston Villa at the end of 2012/2013 season. During the time, while he was still in Aston Villa, in 2011 August, he was loaned to Olympiacos. He played 28 matches from Olympiacos securing 2 goals for his team.

Jean Makaoun is praised for his club loyalty, pa s sing, vision and durability in the game. His discipline in the game, durability, shooting, and tackling skills are very appreciable. However, his skills on dribbling or controlling the ball speed and creativity and especially diving are the cause of his trouble of getting yellow and red cards which he needs to work on.