Jay Chou is a Taiwanese singer, songwriter, rapper, record producer, film producer, and actor. The multitalented actor gained fame with his debut album Jay and the second album Fantasy. As an actor, he made his career with the Japanese manga series feature film adaptation Initial D and won Hong Kong Film Award. He made his Hollywood movie debut The Green Hornet.

Born And Raised In Linkou

He is the son of a teacher mother Yeh Hui-Mei and biomedical researcher father Chou Yao-Chung. He was raised by his mother and stepfather at the age of 14 years old.

Jay went to Tamkang Senior High School with a major in piano. After his high school, he worked on conscripted for mandatory military service.

Started Career As A Singer

Jay Chou entered a talent show Super New Talent King in 1998 but did not win the show. But with the show, he was noticed by Jacky Wu and worked for him. The singer made his debut from the album Jay in 2000. His song Fantasy sold over 750,000 in 2002.

In 2005 he made his debut as an actor from the Japanese manga series movie adaptation Initial D and won Golden Horse Award and Hong Kong Film Award for Best New Performer.

The following year, he appeared along with Chow Yun-Fat and Li Gong in the movie Curse of the Golden Flower. With his fame in Hong Kong movie, he made his Hollywood debut from the movie The Green Hornet alongside Seth Rogen, Cameron Diaz, and Christoph Waltz. 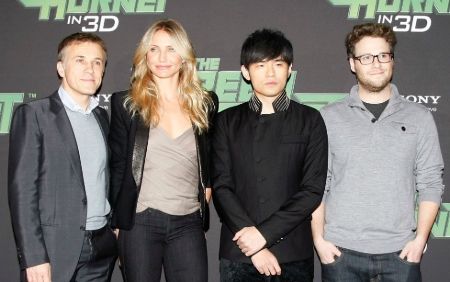 Jay Chou along with Co-star of The Green Hornet at the premiere SOURCE: Getty Image

In 2016, he started working as an executive producer from the movie 10,000 Miles in 2016. The actor also appeared in the feature film The Rooftop, Now You See Me 2, and Kung Fu League. In 2020, he appeared in the Taiwan movies Acting Out of Love. He released his new single Mojito on 12th June 2020.

What Is The Net Worth Of Jay Chou?

Jay Chou earned a good amount of fortune from his work. According to Celebrity Net Worth, he has an estimated net worth of $75 million, as of 2020.

Chou's primary source of income is from being an actor and singer working internationally. He earned $26.356 million annually from his career.

He also owns a luxury penthouse in Taipei for which he spent $27 million for his apartment.

Jay Chau is a married man. Jay met his future bride Hannah Quinlivan through his mutual friend in 2011. Then the couple dated for sometimes and tied the knot on 17th January 2015. 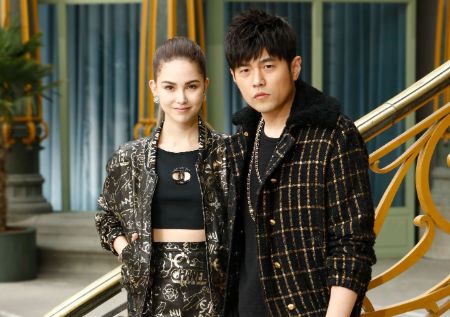 Jay and his wife welcomed his first child daughter Hathaway in July 2015. The second time, the actor was blessed with a son Romeo in June 2017.

The 41-year-old singer currently resides with his wife and two children in Taipei.