Janine Poreba is an American actress known for her performance in the long-running NBC show Law & Order. She is also recognized for her appearance in The Office in 2005. Most recently, she worked in the comedy film Song of Back and Neck. Besides, Poreba is also well-known for being the wife of actor Paul Lieberstein, a Primetime Emmy Award-winning actor and TV producer.

Poreba's Parents Were Both Teachers

Actress Janine Poreba was born in 1973 to American parents. Her mother, Elizabeth Poreba, is an English teacher at Bard High School Early College, and father, John Poreba, is a science teacher at Columbia Grammar and Preparatory School.

Janine Poreba is American by her nationality and belongs to the White ethnicity. She doesn't have any siblings. Talking about her educational background, she graduated magna c u m laude from Harvard University. She later received a master's degree in teaching English from the Monterey Institute of International Studies in Monterey, California.

Besides Acting, Poreba Is An Instructor At Santa Monica College

Janine Poreba couldn't find the success she might have wanted from her acting career. She had only worked on three projects; Law & Order in 1990, The Office in 2005, and Song of Back and Neck in 2018.

Besides acting, Poreba works as an Instructor at Santa Monica College, Santa Monica, California, where she teaches in English as a second language department.

On the other part, her husband, Paul Lieberstein, is a widely famous actor, screenwriter, and television producer. He is best known as the writer, producer, and supporting actor of the hit NBC sitcom The Office.

What Is Janine Poreba's Net Worth?

Despite being an actress and a celebrity spouse, Janine Poreba has kept her lifestyle pretty much under the media radar. As of October 2019, Poreba's net worth is under review, but as per some online sources, her net worth ranges between $100k-$500k.

On the other hand, her husband, Paul Lieberstein, has an impressive net worth of $14 million as of 2020. Lieberstein has earned such a hefty net worth from his decades-long career in the entertainment industry. He has worked as an actor, producer, and screenwriter for over 20 years.

In 2009, Paul played a role in the movie The Goods: Live Hard, Sell Hard along with Jeremy Piven, Ving Rhames, James Brolin, and David Koechner. It grossed over $15 million worldwide.

'The Office' Star Lieberstein Bought The House In LA

According to public records, Paul Lieberstein bought the house in Los Angeles, California, for $450k in March 1991. The mansion is spread out in 1,474 sq ft and features 3 bedrooms and 1 bathroom.

Janine Poreba is happily married to actor Paul Lieberstein since 2008. The lovebirds spent a few years as a couple before they exchanged their vows on Saturday, 19th July 2008, at Battery Gardens, a restaurant in New York. Their wedding was officiated by Rev. Dr. James G. Speer, a Presbyterian minister. 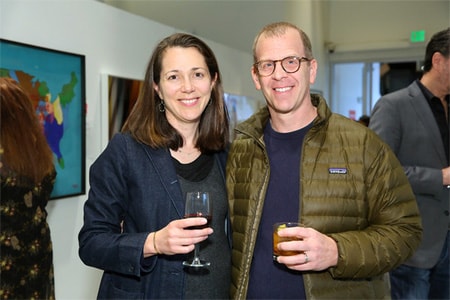 The husband-and-wife doesn't have any children together. They are leading a happily married life. Currently, they reside in the Brentwood neighborhood of LA, California.

Information regarding Poreba and Lieberstein's past relationship is not revealed as of now.