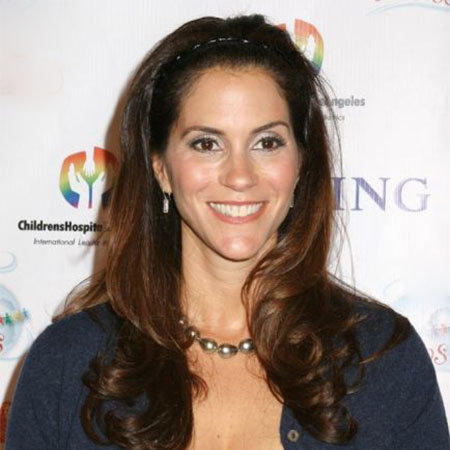 Jami Gertz, an American actress as well as a professional sports investor, is known best for her early roles in numerous films. She is also regarded as one of the leading faces during the 80s and 90s. Gertz kicked off her acting career at the early age of thirteen with a minor role in one episode of a TV series Diff’rent Strokes. In 1986, she featured in a musical film Crossroads alongside Ralph Macchio and Joe Seneca. From 2012-14, she was one of the lead casts in a TV series The Neighbors.

The actress has also collected a large amount of net worth. The majority of the money she earns from his various projects which are still quite popular in the Hollywood industry.

Gertz is also a co-owner of the NBA club Atlanta Hawks along with her husband Antony Ressler. She is married to him since 1988 and has three children together.

Jami Gertz was born Jami Beth Gretz on 28th October 1965 in Chicago, Illinois, the United States of America under the birth sign Scorpio. She is the daughter of Walter Gertz (who was a builder as well as a contractor) and Sharyn Gertz. She follow  Conservative Judaism.

Her parents raised him along with her two brothers, Scott Gertz and Michael Gertz in the city's nearby suburb of Glenview. She belongs to American nationality and her ethnicity is White.

Gertz graduated from Maine East High School. She then studied drama at New York University. She was seen in one episode of Diff’rent Strokes as a child actor. She was discovered by Norman Lear's company.

Jami Gertz started her professional career in acting in 1981 in a comedy film, On the Right Track directed by Lee Philips. The same year, Gertz portrayed the role of Patty in the romantic drama film, Endless Love starring Brooke Shields, and Martin Hewitt.

After that, Gertz co-starred in the 1982-83 TV series Square Pegs. In 1984, Jami appeared in the teen movie Sixteen Candles. More significance was given to her in the movie Less Than Zero (1987), as the friend of a doomed drug addict played by Robert Downey Jr.

After that, she worked as a scent designer for Lanvin in Paris, France. She returned from there to the United States and landed a key supporting role in the blockbuster movie Twister (1986).

Jami Gertz appeared as one of Jerry’s girlfriends in the 1994 episode of Seinfeld. Later, she played the recurring role of Dr.Nina Pomerantz during the 1997 season of ER.

Jami Gertz took up a recurring role on the Fox hit Ally McBeal as Kimmy Bishop in 2000. For her superb acting, she was nominated for an Emmy for Outstanding Guest Actress in a Comedy Series. Again in the year 2002, she returned to this role in one more episode as a guest star. Besides this, she portrayed comedian Gilda Radner in the television movie Gilda Radner: It’s Always Something.

Jami Gertz starred as Brandy, a wanted criminal’s girlfriend in Undercover Christmas (2003). After that in the year 2005, she played the lead role in the TV film Fighting the Odds: The Marilyn gambrel Story.

Jami Gertz returned to television with a guest role in the Modern Family episode “Slow Down Your Neighbors” in the year 2011. In the same year earned a producers’ credit on the Academy Award-nominated film named A Better Life.

Gertz has collected such a hefty amount of money from her prolific acting career.

Here is the list of her movies that made an impressive box office collection:

Gertz along with her husband has a lavish house in Beverly Park community in Los Angeles, California. The mansion the couple bought for $38,000,000 from the actor Tom Cruise in mid-2016. The couple likewise owns a vacation home in Malibu, California. The average price of the house in Malibu is around $1.8 million.

Besides, the billionaire-couple has also involved in supported numerous charitable works and movements.

In 2011, the Giving Back fund named she and her husband the number-one donor to a charity of any celebrity in 2010.

They also founded a charity organization Ressler-Gertz Foundation in 2012. The couple has donated over $10 million to their foundation.

Married To Antony Ressler since 1988

Jami Gertz is a married woman.  Jami Gertz is married to Antony Ressler since 1988. Her husband is an American entrepreneur. He co-founded the private equity firm Apollo Global Management in 1990. He became a co-owner of NBA team Atlanta Hawks along with Grant Hill in 2015.

Gertz and her husband Antony Russler are members of the investment group led by Mark Attanasio that purchased the MLB franchise Milwaukee Brewers.

In 2015, they also purchased ownership of the NBA team Atlanta Hawks. She went on to represent the Hawks in the NBA Draft Lottery for the 2018 NBA draft.

The couple has three sons together. Their first son Oliver Jordan Ressler was born in 1992. After three years, they welcomed their second son Nicholas Simon Ressler in 1995. In 1998, the actress gave birth to their third son Theo Ressler who completed their family.

Jami Gertz resides with her happy family in the exclusive Beverly Park community. They also have a vacation home in Malibu, California. It's been nearly three decades that Gertz and her spouse Ressler sharing the wonderful married life with no conflict.