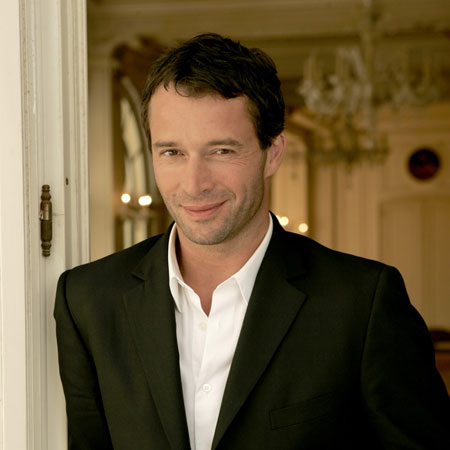 James Purefoy, an English actor, is best known for his role as Mark Antony in the HBO Series, Rome. He is also recognized for his work in the series like The Following, The Saint, The Philanthropist and Solomon Kane.

Purefoy is happily married to his longtime girlfriend, Jessica Adams, a documentary director, and producer. The duo is proud parents of three children, a daughter, and two sons. He also has a son, Joseph from his previous relationship with actress Holly Arid.

James Purefoy was born James Brian Mark Purefoy on June 3, 1964, in Taunton, Somerset. He is the eldest son of Anthony Chetwynd and Shirley (née Taylor) Purefoy. He is British by nationality and belongs to the Caucasian ethnicity.

Purefoy attended Sherborne School and left the school with only one O-level. Then he joined night school where he earned 11 more O-levels. Later, he went to Brooklands College in Weybridge and earned A-levels from there.

Later he enrolled at the Central School of Speech and Drama where he studied acting. He worked at the Yeovil District Hospital as a porter before he joined the acting academy.

James Purefoy started his career as a stage artist. He played Romeo in Romeo and Juliet in Leatherhead. Then he acted in numerous drama and projects including Riverside Studios and Equus. In 1988, he joined Royal Shakespeare Company (RSC) and worked in The Tempest, Macbeth, King Lear and The Man Who Came To Dinner.

Purefoy has worked in numerous plays like Hamlet,  Leeds, The Servant, Four Nights in Knaresborough, The Relapse, Flare Path and others. He made his television debut in 1990 with Coasting in a lead role. The next year, he appeared in two TV series, The Case-book of Sherlock Holmes and Boon working in an episode in each.

Purefoy was screen tested for the role of James Bond in GoldenEye in 1995, however, he lost the role to Pierce Brosnan.  He made his film debut the same year in Feast of July. He worked in over half a dozen films before he got the role of James in Photo Finish which earned him Jury Award for Best Actor in 2003.

Some of his notable film and TV work includes A Knight's Tale,  Rome, Blackbeard: Terror at Sea, Beau Brummell: This Charming Man, Wicked Blood, Frankenstein, The Following, Roots, Trollhunters, and others.

James Purefoy has an estimated net worth of $6 million which he accumulated from his acting career. He earned between $150k-$300k per episode for his appearances on TV series. Similarly, he earned around $500k from films.

Purefoy has worked on a number of hit films and some of them are included below,

James Purefoy is a married man, he tied the knot to his longtime girlfriend, Jessica Adams who served as the documentary director and producer. The pair exchanged their vows at an intimate ceremony held in Somerset in July 2014.

The duo is proud parents of three children, a daughter, Rose Purefoy (born on 2012) and two sons, Ned Purefoy and Kit Purefoy (born in 2017).

Before, James Purefoy was married to an actress Holly Aird. They were married in 1996 and gave birth to their first child, a son Joseph Purefoy in 1997. After around six years of married relationship, the couple divorced in 2002.

Purefoy is a huge football fan and he is a supporter of Yeovil Town FC.

Check out the James Purefoy video,