Is Dennis Rodman still single after his Divorce? Know about his Married Life and Relationship 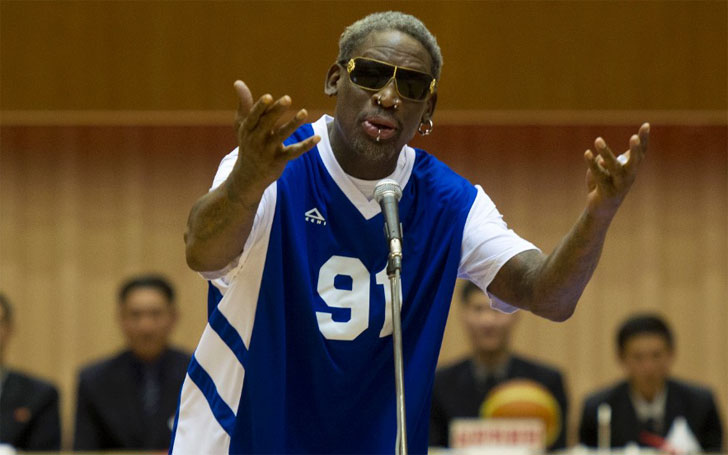 Keeping all of his professional life aside, today we will be discussing his personal life that includes his present relationship, past affairs, marriage, divorce and more.

Is Dennis Rodman still single? Or Dating Someone?

It's always a hard subject to discuss when it comes to the personal lives of celebrities. They love to keep their life secretive and fans keep guessing.

Do you know, Rodman is married thrice and divorced in the same number? There is often numerous dating life news broadcasted in the media which has confused his fans. After he got married and divorced for three times, there are no any rumors of his dating life in the press. While checking his official Instagram account, he shared pictures with Sherie Wagner, Tori Black.

After all those terrible relationship failures, he was spotted dating Jeanie Buss. He once posted a picture with Buss in his Instagram claiming her as his girl. They were said to be one of the most improbable hookups in the history of the sport.

Kickin it with my girl, and @lakers owner, @jeaniebuss at @lakers v @dallasmavs game last night. Love U Jeanie!

No doubt, Dennis Rodman's professional life is thriving, but his personal life is just away from it. Rodman was first married to Annie Banks back in 1993. The couple kept their marital life too secretive and did not let anyone know about it. However, the couple is blessed with a daughter, Alexis.

After the first divorce, Rodman started dating American actress Carmen Electra back in 1998. The couple dated for around ten months and got married on 14th November 1998. Sadly, the couple separated just after a month of their wedding.

Rodman tied the knot for the third time and this time he got married to an American reality TV contestant Michelle Moyer. The couple tied the knot on 13th May 2003 after four months of dating. The couple was married for around eight years and seven months. Moyer and Rodman have two children together; Dennis Keith and Trinity. After spending around eight years of conjugal life together, the couple got divorced in 2012.

Out with the family last night at @lakers vs @sacramentokings game. Trinity, DJ, & Michelle Rodman #nba

Besides his marital life, he was once engaged to English model Alicia Douvall. The couple dated for over a year from August 2003. Later, the pair engaged in November 2004 but the relationship did not work out, and the duo parted away.

So this was the take on tour famous NBA star Dennis Rodman, we tried to cover all his affairs and relationships here from this column, we hope you all enjoyed it. Stay with us for more interesting gossips on celebrities of your choice.