Iceland Records Their First Goal In The History Of World Cup 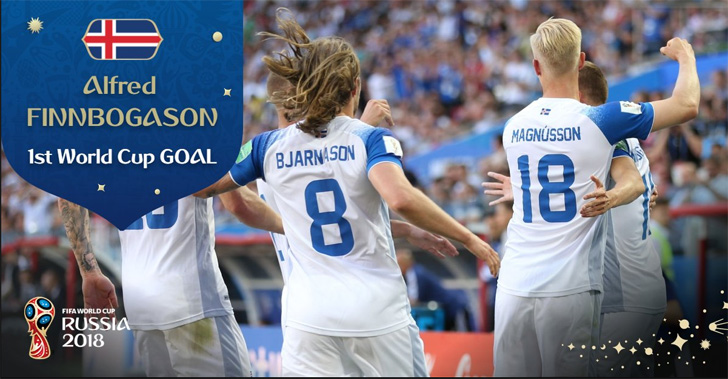 Iceland's Alfred Finnbogason scored an equalizing goal at the 23rd minute of the game against Argentina, recording their first goal in the history of World Cup.

It took just 23 minutes for #ISL to score their first #WorldCup goal pic.twitter.com/76ZbyoRGBi

A historic goal for Iceland slotted home by Finnbogason from close range after defensive uncertainty from Argentina. Caballero didn't cover himself in glory with an unconvincing parry clear from Sigurdsson's center.

Finnbogason is the kind of player that is always in the right place at the right moment. You really cannot underestimate the character of the Icelandic team.

They never give up, and it’s maybe good to have in mind that Iceland also conceded first against England and Portugal during UEFA EURO 2016. On both occasions, they caused a major upset.

This is the World Cup debut for the Iceland national team following their debut in the 2016 Euro Cup.

The first goal of the tournament was scored by Argentina's Sergio Aguero at the 19th minute of the game.

Vote for Budweiser Man of the Match has started.

The vote for the @Budweiser #ManoftheMatch is now open! #ARGISL

"This is a great success for Iceland. I firmly believe that Argentina will go far in this World Cup, so it's a fantastic result for us. We could not give them too much space, knowing the talent they have. But although they had some good opportunities, so did we. We wanted to use the space behind them more than we did - but it's difficult when you don't have the ball!" said Heimir Hallgrimsson, Iceland coach

Jorge Sampaoli, Argentina coach, "Messi was in a very uncomfortable situation because Iceland played very defensively. He couldn't find the space he needs. But we still believe in ourselves and we know that we have all the tools to succeed."

"It's a dream come true for me to have saved that penalty, especially as it helped us gain a point that could be very important for us in trying to qualify from this group. I did a lot of homework, watching a lot of penalties from Messi. And I also looked back at some of the penalties I had faced and what he might be expecting from me. I had a good feeling he would put it that way," said Hannes Thor Halldorsson.