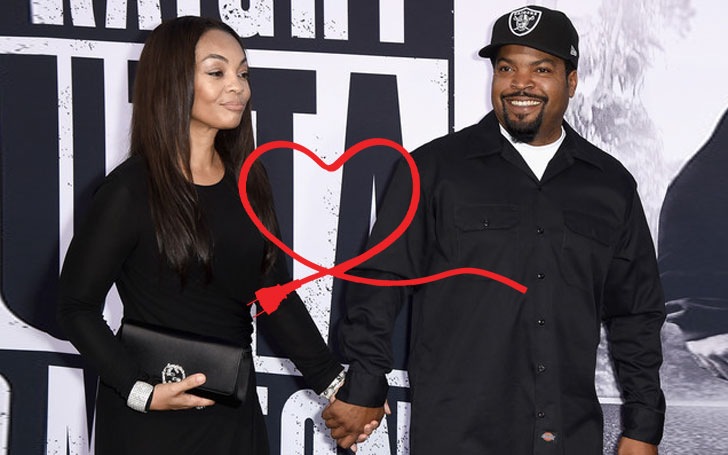 Kimberly Woodruff is the only women in O'Shea Jackson Sr.'s life. The beautiful and talented wife of Ice Cube is also a super-mom, she has four kids!

Ice Cube, the famous American rapper/ actor, who started his career in the late 1980s with NWA (Niggaz wit Attitude), always showers his wife with praise.

Unlike other hip-hop couples, Ice Cube and Woodruff are really tight. They have what you call ''a happy married life'' in the truest sense.

Kim and Ice cube can be considered as an epitome of love, relationship, marriage and family, as the couple has been married since April 26, 1992, which makes it almost 26 years of being them together. Would you not want to know how did this happen? Sure do!

It’s believed that Kim first met Ice in college, but Kim didn’t pay much attention at first. Like it’s said what’s meant to be will find its way, they eventually started dating. It was, however, not so easy and instant.

Ice Cube went unnoticed for 6 months in Kimberly's eyes. She was apparently in a relationship at that time. But, Ice Cube and Kimberly met again and this time Woodruff was single. The couple started dating in 1998 and got engaged in 1991.

Cube who played the role in 1991 hit film Boyz n the Hood where he went on to describe how he proposed to his wife for the first time. And In May 2018, during the chat with Nova's Fitzy & Wippa, he recalled proposing for a second time to his wife.

The second time I basically said, "If I propose again, would you say yes?

Therefore Cube did not have much pressure about the result. And the couple still sharing the blissfull married life with their five children.

Why Is Kim So Special To Ice Cube?

When asked about Today.com ''of all his achievements throughout his career and the most impressive thing in his life'' he said it might be being married for 25 years with kids.

When asked how he has managed to keep somewhat a normal life throughout the craziness of his professional life? He answered:

‘Kim is my backbone you know, she is my confidant, she is like everything… my partner in this…. I wouldn’t be here without her without a doubt cause she keeps me grounded to the point where I know who I am all the time.

He added ‘This business never was able to take away who I am….I attribute that to being with her keeping everything in perspective for me”.

That's a dedicated and true couple, right there!

In an interview, Ice said

“It’s a true partnership. I respect my wife and I receive the same. She still gives me butterflies and I want her to see me as the man she still wants to be."

Well, it seems that their marriage is actually made in heaven and we hope that it remains eternal.

When Ice Cube was asked in January 2005 on NPR by Fresh Air's Terry Gross whether he allowed his children to listen to his music, he responded: "What's worked for me is instilling in my kids a level of self-respect", and helping them to understand the content of not just music but the violence found on the evening news.

Ice Cube's Career And Net Worth And Earnings

Ice Cube's net worth is $160 million at present. He has earned a huge amount of salary from his career.

His 1992 release, The Predator, was recorded during the 1992 Los Angeles riots and became the first album in history to debut at the top of both the pop and R&B charts.

Widely known for her marital relationship with the world-renowned artist Ice Cube, Kimberly has never come into the limelight and never been involved in any flashy show of stardom herself, expect her red carpet appearances with her spouse.

The name of her parents' is also hard to pin down. She has always been focused on her family.