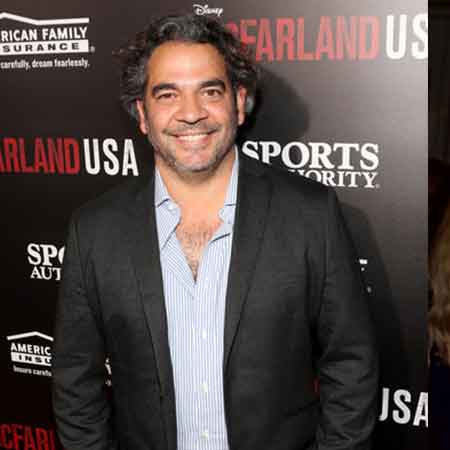 American actor Hemky Madera is doing incredible progress in his acting journey. From The Bookie's Lament, the actor managed to star in the popular superhero movie Spider-Man: Homecoming and he will be seen in an upcoming 2019 movie Spider-Man: Far From Home. Other than that, Madera has starred on numerous movies and TV series throughout his career spanning over 18 years long. The actor is also leading a happy married life with his wife Jesse Lynn Madera.

Hemky Madera was born on 26 January 1977 in Queens, New York. He is a son of Dominican parents Luis Madera and Gisela Madera. His star sign is Aquarius according to which he is a kind and straightforward person. He spent most of his early days in his hometown New York City with his family. He belongs to American nationality and as far as his ethnicity is concerned, Hemky is mixed.

In the year 2000, Hemky Madera began his acting career from the short film The Bookie's Lament. Following the debut, he briefly starred on the television series Paraiso (2000), Los Electrolocos (2000), Dreaming of Julia (2003), and others.

Following his remarkable performance in several movies and series, the actor landed a role in the police procedural television series Law & Order: Criminal Intent in 2004. Then in 2005, Hemky starred on another series named Battleground: The Art of War.

Likewise, the actor appeared on the American drama film The Lost City in 2005. In the movie, he played the role of Miliciano. Madera was cast alongside the well-known stars like Andy Gracia, Dustin Hoffman, Bill Murray, and others.

The star then notably starred as Tavo on the action movie La Soga in 2009. Similarly, Madera gave his voice for the character Chorizo in an animated action-comedy movie Rango in the year 2011. Then in 2014, the actor worked in the drama thriller movie Supremacy. In the film, he played the role of Miguel.

Also, the talented actor got a golden opportunity to star as Mr. Delmar in the 2017 superhero film Spider-Man: Homecoming. In the movie, Madera shared the screen with the popular Hollywood actors like Tom Holland, Michael Keaton, Jon Favreau, Zendaya, Marisa Tomei, and many others.

Besides his remarkable movie roles, Madera starred on several TV shows like Brothers & Sisters (2006), My Name Is Earl (2008) and others. He appeared on a recurring role of Ignacio in the dark comedy television series Weeds from 2008 to 2010. In the year 2011, he starred on the recurring role of Carlos Saldana in the series Caribe Road.

Similarly, the actor has been working as the main character in the television crime thriller series Queen of the South since 2016. The series stars other popular actors like Alice Braga, Justina Machado, and others. Alongside the series, Madera has been appearing in a recurring role of Pedro Uribe in the comedy series Brockmire since 2017.

In the coming year 2019, the skilled actor Hemky Madera will be seen in the superhero movie Spider-Man: Far From Home. In the movie, he'll be reprising the role of Mr. Delmar from the Spider-Man: Homecoming.

Hemky Madera's Net Worth And Earnings

Hemky Madera is a successful Hollywood actor who is earning an attractive amount of money for his incredible acting skills. From his acting career of over 19 years, Madera accumulated an impressive amount of money.

His net worth as per some reliable sources is reported around $1 million. He has worked in many box office hit movies like La La Land which grossed over  $446 million worldwide against a production budget of $30 million. The actor's role in such a hit movie obviously earned him a good payment.

Hemky Madera is happily married to his beautiful wife Jesse Lynn Madera for a long time now. The couple tied the knot back in 2011, in an intimate wedding ceremony. Since then, the two are leading a blissful conjugal life.

Hemky and his wife Jesse rarely share their love story in the media but we can say the two are an amazing couple. They share two adorable children; sons and are living a joyous family life.